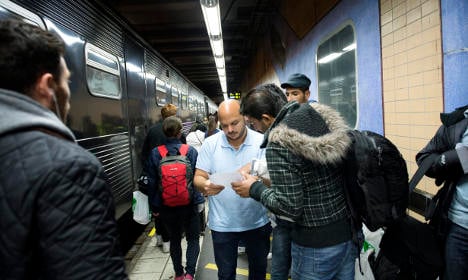 Refugees in Stockholm asking how to board a bus to Haparanda, the gateway to Finland, earlier this week. Photo: Jessica Gow/TT

“We will have an enhanced aliens control by the police, border guards and immigration authorities in the border district. We aim to reach all unauthorised incomers to guide them to a reception hub … where they can apply for asylum in Finland,” Interior Minister Petteri Orpo told the AFP newswire in Helsinki on Thursday.

The new reception hub is planned in northern Finland, near the border with Sweden.

Finland has seen a dramatic rise in the number of refugees arriving in the region.

Most of them are Iraqis who have travelled to the small northern Swedish town of Haparanda, and from there have freely walked to the adjacent Finnish town of Tornio.

Around 1,200 migrants a week are arriving via this northern route, according to the Finnish Immigration Service.

Finland has been granting asylum to a higher percentage of Iraqis compared to Sweden — 54 percent against 33 percent in the first half of this year — explaining Finland's increasing popularity amongst Iraqis.

“Sweden is good for Syrians, but bad for Iraqis. I read that on Facebook,” 17-year-old asylum seeker Ali, who had arrived from Iraq's capital Baghdad, told AFP in Helsinki recently.

The ministry had earlier stressed that Finland would not restore full border controls at this point, but would “be prepared for it, if necessary.”

Orpo said migrants could be kept at the reception hub for a maximum of one week, and then “those who enter the asylum process will be directed to reception centres around Finland in a controlled manner.”

He added that Finland was aiming to deport people with no viable asylum case “right away”.

The migrants would be required to stay at the reception hub until they were registered, but Orpo said there were no plans to put up walls or fences.

“We will find a Finnish, humane solution to take care of this, respecting people's rights and their circumstances,” he said.

Germany, followed by Austria and Slovakia, announced it would introduce border checks earlier this week after revealing it could no longer cope with the record influx into its territory.

But Sweden, which takes in the second largest number of asylum seekers in the EU, will not follow suit in the near future, Prime Minister Stefan Löfven vowed on Monday.

“We are not close to such a situation,” said the Social Democrat leader at a joint press conference with European Parliament President Martin Schultz.