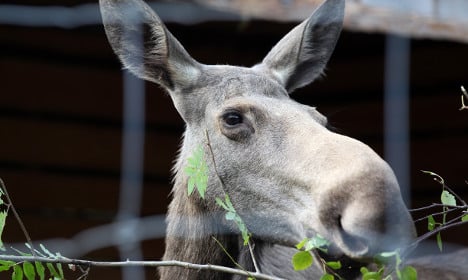 Thousands of elks travel through Sweden every year in search of love during their mating period from the end of September to the beginning of October. But romance can quickly turn sour when the wild animals become tragic victims of road accidents.

“We're in a period when the elks are moving around the most, when they try to find ladies,” Anders Blomgren, a police officer working for the National Wildlife Accident Council (Nationella viltolycksrådet), told Swedish tabloid Aftonbladet on Friday.

A total of 2,709 elks have been died on Swedish roads so far this year, 23,230 deer and 1,819 wild hogs, according to the National Wildlife Accident Council (Nationella viltolycksrådet). Last year saw 47,167 similar fatalities.

The figure tends to peak in autumn as the Nordic days grow shorter.

“One of the reasons is that dawn and dusk [when elks are at their most active] coincide with our traffic peaks, when we spend the most time on the road, quite simply,” said Blomgren.

The  National Wildlife Accident Council has now launched a campaign designed to warn drivers of the randy animals and to ask them to adapt their own speed to stay safe on the roads this autumn.

“It's the same advice as always. If you're going at 90 kilometres an hour and it's dark and rainy and an elk step out on to the road you don't stand a chance,” said Blomgren.

The Local reported last week that Stockholmer Benjamin Eliasson was to receive an award for inventing a motion sensor system that could potentially reduce the number of collisions with large wild animals on Swedish roads.

He was presented with the 'Golden Elk' award from Älgskadefondsföreningen, a non-profit organization working to reduce road accidents in Sweden.

The concept, if made a reality, would see sensors set up in parts of Sweden where the roads are unfenced. If these sensors detected large animals nearby, a signal would be sent to the roadside poles, prompting a light to begin flashing.