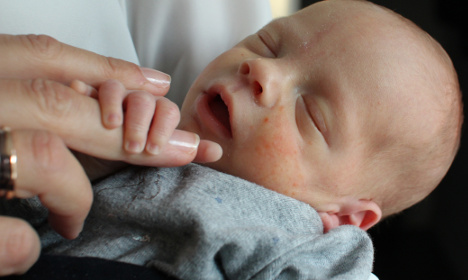 Vincent when he was just over a month old. Photo: AP Photo/Ben Jary

Vincent, who is one, was born on September 4th a year ago. In a new interview with his parents, Malin Stenberg and Claes Nilsson, published by Swedish newspaper Dagens Industri (DI) on Friday, he is described as a happy, healthy child, not that different from any other one-year-old.

But there is one thing that is unique about Vincent.

He is the world's first child born through a womb transplant in an operation which spelled a major research breakthrough for infertile women across the globe a year ago.

His parents have now spoken publicly for the first time after the AFP news agency published an anonymous interview with the couple after he was born. They describe a journey lined with hundreds of hospital visits, risky operations and hormonal treatment.

“We could not afford to think a single negative thought,” Nilsson told the DI newspaper in an exclusive interview on Friday.

He and Stenberg struggle to put into words how grateful they are to the 61-year-old woman – the mum of Nilsson's best friend – who donated her womb for the ten-hour transplant surgery.

“How could anyone do this for us? A 'thank you' is not enough,” he told the newspaper.

“I have never seen it as a sacrifice. I felt that if I can do this for Claes and Malin I will happily do it, and I don't need [my womb] any more,” she told DI.

For Mats Brännström, the Swedish professor in obstetrics and gynaecology of the University of Gothenburg and Sahlgrenska University Hospital, who led the research team and carried out the pioneering operation, it has been a breakthrough on a personal level as well.

“The news spread all over the world, even in North Korea have newspapers written about the project. In gynaecology this is the biggest thing that has happened since the IVF treatment was developed. And it's huge in the transplantation world as well,” Brännström told DI.

Vincent's mother, who was born without a womb, was one of nine who received a transplant from live donors under Brännström's programme. The largely successful trial have seen another tree babies being born in the past year and another of the women is currently pregnant.

Stenberg has since removed her new womb over medical concerns that she could develop pre-eclampsia if she and Nilsson were to try for another child.

“What we have longed and strived for had become reality. Why gape for more?” said the happy mother.