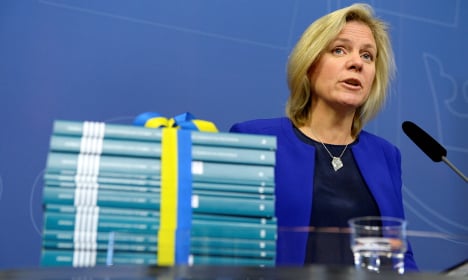 Key proposals in the government’s financial plan for 2016 include a huge investment in improving housing in Sweden, with 5.5 billion kronor ($665m) set aside for various projects.

The Nordic nation is experiencing a major housing crisis, with long waits for rent-controlled apartments and a growing black market in second hand contracts, coupled with spiralling prices for those wishing to buy property in the country’s major cities.

Finance Minister Magdalena Andersson told a press conference on Monday morning that the government would focus on making it more attractive to build rental apartments.

“It's the biggest housing political investment in 20 years in Sweden,” she said.

The second largest spending area in the draft budget is healthcare, followed by tax cuts for pensioners.

Prime Minister Stefan Löfven's government has also committed itself to ensuring Sweden has the lowest number of people unemployed in the whole of the European Union by 2020, a target criticized by a number of experts as unrealistic.

The Nordic country currently enjoys the 12th lowest unemployment rate in the union. According to the government's own predictions, it will drop from 7.6 percent to 7.1 percent next year, reaching a low of 6.5 percent in 2017 — still putting it behind countries such as Germany (5.0 percent) and Austria (5.6 percent).

“I insist that it will be very difficult to reach the target. Radical measures will be required,” economics expert Jesper Hansson at Sweden's National Institute of Economic Research told the Dagens Nyheter newspaper on Monday.

Other major initiatives, which the coalition had already revealed in recent weeks, include free dental care for those aged under 23 and introducing a third month of ‘use it or lose it’ parental leave aimed at encouraging fathers to take more time off to look after their children.

Local municipalities are set to receive extra funding, partly to help them handle the influx of refugees arriving on Swedish soil.

Higher taxes on products including petrol and diesel will fund the financial plan, if it is agreed on by Swedish politicians.

The budget will be debated and voted on in parliament in October.
It should be passed without any hassle, after Sweden's mainstream parties struck the December Agreement deal last year, to avoid unexpected opposition to future government financial plans, following a political crisis last autumn.
But centre-right opposition politicians nevertheless voiced their concerns to Swedish media soon after the draft announcement.
Erik Ullenhag, economy spokesperson for the Liberal Party, told the TT news agency on Monday morning that the government should have been more focussed on “the need for greater wage flexibility, lower taxes on labour and less stringent labour laws” in order to help grow Sweden's economy.
Ulf Krister Petersson who represents the Moderates on economic issues argued that the government was not doing enough to “stem the rapidly increasing costs of health insurance, integration and migration”.
However the Left Party, which is not in coalition with Prime Minister Stefan Löfven's Social Democrats but backs the ruling party on may issues, said it welcomed the new draft budget.
Its economics spokesperson, Ulla Andersson, told TT that it was pleased that higher taxes were on the way in order to help improve the country's welfare system and tackle the housing crisis.
“It's no secret that we would like to see even greater redistribution of taxes,” she added.
Url copied to clipboard!