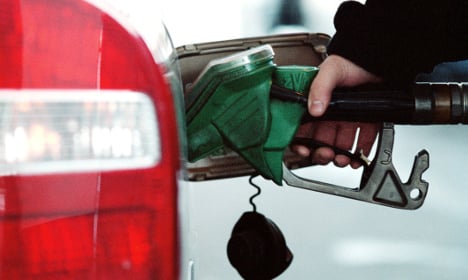 Petrol prices are going down in Sweden. Photo: Fredrik Persson/Scanpix

Sweden's leading petrol companies cut their guideline price of unleaded petrol and diesel by another 0.10 kronor on Monday, bringing the total cost down to 12.69 kronor ($1.54) and 12.70 kronor a litre, respectively.

The cut spells extra financial relief for drivers following months of falling prices at pumps across Sweden which saw a litre of unleaded petrol peaked at 14.49 kronor in mid-June.

Petrol prices generally tend to drop in September after the high demand of the summer road trip holiday season is over. But this year dropping crude oil prices have been pushing fuel costs down even further.

“I like to see the price of crude oil as a surface of water with petrol prices as corks that can either float high or low in the water,” Ulf Svahn, chairman of the Swedish Petroleum and Biofuels Institute (SPBI), told The Local earlier this summer.

The benchmark price for crude oil worldwide, Brent Crude, was $48.13 per barrel on Monday – down from more than the double in September last year.

“It's good news if you like low prices, but you should remember that not everybody does. Higher prices are of course better from a climate perspective,” said Svahn in July.

Falling prices are likely to take away some of the sting drivers are likely to feel if government plans to raise the tax on petrol come into effect from the turn of the year.

“It is of course not an easy decision to make, but some expenses ended up being higher than we knew,” Social Democrat Finance Minister Magdalena Andersson, who presented the government's budget proposal for the coming year on Monday, said when she advertised the plans a month ago.

While seen by many as a move to placate its Green coalition partners, the extra tax revenue is also meant to fund a series of welfare reforms the government wants to introduce in the coming year. But it has not gone without criticism.