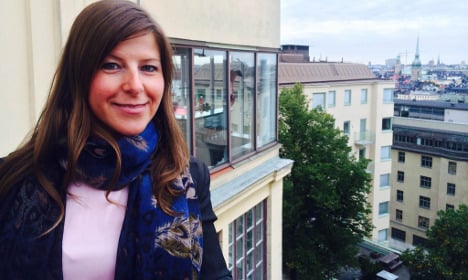 When Fabienne Roy's university studies temporarily brought her to Sweden in 2004, it was the start of a love affair that never ended.

Today working as head of human resources at one of the world's leading digital companies in Stockholm, she remains convinced that the city is the best place to be for international professionals hoping to score a job with one of the capital's many startups – or even launch their own.

“Sweden does a lot for startups and expats. It is really easy to set up a company – it takes one day. There's a lot of skilled people here as well so it is easy to find new talent,” she tells The Local.

After spending a year in Jönköping in southern Sweden as part of the Erasmus programme for foreign students, Fabienne returned to France to finish her studies. The 32-year-old's own Swedish career trajectory did not begin in earnest until after she began working for Netsize, a company facilitating mobile operator micro-payment and messaging by connecting their clients to carriers, in 2007.

“I had been looking for opportunities in Sweden but it was quite difficult to find anything at the time, so I started working for an international company in Paris in the hope of one day being sent to Sweden,” she explains.

Her dream came true when she was asked to help oversee the merger with Ipx, a former company of Swedish Ericsson, after the latter was acquired by Netsize's parent company Gemalto. The move eventually saw her being transferred to Stockholm to take on the role of HR manager for the Nordic region.

“My role is really big,” she explains. “I'm in charge of recruitment, training plans, career plans, social affairs. There's an administrative part to my job, there's a legal part, and there's a lot of resolving conflict to make sure that the process runs smoothly.”

READ ALSO: 'We've done everything with no money at all'

Fabienne says that her own company's international staffing reflects the Swedish capital's growing reputation as the tech and startup capital of the world.

“We are 14 different nationalities spread out over 55 employees at my job. It is a really diverse workplace, both in terms of gender and nationalities. Actually, few Swedish people apply for positions with us – maybe because we're not Spotify or H&M,” she laughs, namedropping two well-known Swedish brands.

She says her advice to other Sweden-based startups wishing to attract even more international staff is to remember their unique selling point.

“You have to sell the job. The best advantage of working in startups is the responsibility, you immediately see the value of your work without being just a piece of the puzzle,” she says.

It is not easy to convince the HR manager to say anything negative about Sweden. The Swedophile even admits attending crayfish parties at the Swedish Chamber of Commerce when she was living in Paris.

But when pressed, she mentions she would like it to be made easier for foreign talents arriving in the country as students to stay on after they graduate.

“There should be more exchanges between universities and companies. In France we have a lot of internship schemes, but I don't see that as much in Sweden. This is something that could be developed,” she says.

READ ALSO: 'Sweden should be more proud of its brand'

However, Fabienne admits that the gap between university and working life can be hard to bridge. Although she herself settled in fairly quickly when she returned to Sweden in 2013 – almost a decade after her studies ended – it was not all smooth sailing.

“It was more complicated than expected. It's different when you're a student and when you work. There was a lot to learn, everything from laws to corporate culture. In France decisions are usually made at the top, but in Sweden it's important that everyone gets to express their opinion,” she says.

“And in Sweden people are really focused on the work-life balance, the private life is seen as important, whereas in France you have to really show that you work hard and stay late. It was difficult for me to slow down, but it has made me open my eyes to the fact that it is important to take care of ourselves as well as our jobs,” she says.

She adds that the generally silent and laidback nature of the Nordic people also contrasts with the energetic Parisians she was once used to mingling with in the French capital.

“When I went back to Paris to visit I thought it was so nice that people were talking to each other on the Metro. In Stockholm you just sit there with your smart phone,” she says.

Still, it is a very minor annoyance among all the social as well as career opportunities Fabienne argues Sweden offers, particularly for those working in tech or startup industries. And when asked, she quickly insists she in the Nordic country to stay.

“For me, Stockholm is the best city. Sweden is a country which is in advance in a lot of areas: innovation, research, environment. It's a kind of guiding light for other countries. It's good to be in a place where everything is happening. Sweden is creating the future.”