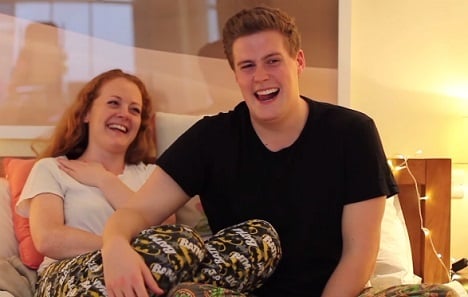 “I have no idea how the pill works. It’s just the pill.”

It’s a common refrain, and an international one. In fact, nearly 30 percent of women who use the pill don’t actually know how it works, according to a recent survey.

In honour of World Contraception Day on September 26th, Swedish birth control and fertility app NaturalCycles asked 3,000 men and women across the UK, Sweden, and the US, some basic questions about reproduction and contraception.

Scroll down for video

Questions included how long sperm can survive, when a woman can get pregnant, and how the pill actually works, among others.

The survey revealed a surprising lack of understanding among respondents , with barely half answering the questions correctly.

In addition, nearly 80 percent of the women surveyed say they would choose natural methods of contraception, but results suggest that they are held back by their general lack of awareness.

A video in which couples were quizzed about their knowledge of birth control highlighted some of the differences between Brits’ and Swedes’ approach to the issue.

Producing the video put some of these differences into sharp relief, with Brits only willing to speak from within the comfort of their own bedrooms, while Swedes were willing to speak frankly about sex on camera with total strangers on their lunch break.

But one theme was common. Both Brits and Swedes had surprising gaps of knowledge in how their chosen form of birth control actually works.

“The taboo of talking about modern methods of birth control with your partner has led to a huge educational void,” says Dr. Elina Berglund, CTO and co-founder of NaturalCycles.

“We tend to go along with what our friends or doctors suggest, often not reading the label, and stick to the same method that we were prescribed to as teenagers. But there are so many more options.”

Berglund adds that birth control is a privilege that western women frequently take for granted – while millions of women in the developing world don’t have that option.

In an effort to do something about the problem, NaturalCycles has launched the #LifeChangingOptions campaign, which aims help women in the western make choices in line with their needs and in so doing help empower women in the developing world.

For every use of the hash tag #LifeChangingOptions, the company will donate 1 krona to Kvinna till Kvinna, a non-profit foundation which educates and empowers women in the developing world.

“It is part of our reproductive right to understand the options available to us to prevent unwanted pregnancies,” Berglund concludes.