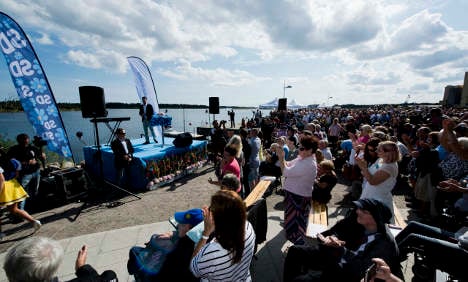 A Sweden Democrat gathering in Sölvesborg over the summer. Photo: Erland Vinberg/TT

An average of five municipal councillors are stepping down from the anti-immigration party each week, according to Swedish publication Expo, which has done a large-scale investigation into the nationalist group’s role in local government.

The party scored 1324 seats across Sweden in local elections in September 2014. But the magazine reports that 186 ordinary councillors have quit the organization since then, while 78 council deputies have also left office. Some of the politicians have defected to one of Sweden's centre-right parties, while others are standing as independents and 35 seats remain vacant.

According to Expo, internal conflict within the party and concerns over how it is being run are the root cause of the mass defections.

Uno Björkman, a local politician who recently left the Sweden Democrat party in Nässjo in central Sweden, told the magazine: “These miserable conflicts have dominated everything, we have not been able to work seriously politically since the election.”

The leader of the Sweden Democrats, Jimmie Åkesson, spent six months on sick leave between October 2014 and May 2015, with Mattias Karlsson covering for him during that period.

Karlsson later told Swedish media that Åkesson had been battling fatigue symptoms for years and even struggled to recall what he had been doing during his last parliamentary leader debate.

But despite reports of ongoing internal conflicts at the top of the party, Åkesson has remained at the helm of the nationalist group since his return to work.

The Sweden Democrats established themselves as the third largest party in the country following national and local elections a year ago.

Since then they have moved forward in a series of opinion polls, but in a Sifo survey, published on Sunday, the party’s support remained virtually unchanged at 17.7 percent, compared to 17.8 percent last month.

“It is surprising that the Sweden Democrats’ support has not improved,” political scientist Ulf Bjereld told Swedish newspaper Aftonbladet.

“Many Sweden Democrat members had probably hoped for a surge when the refugee issue received so much attention as it’s their main issue,” Bjereld said, referring to the current European refugee crisis.