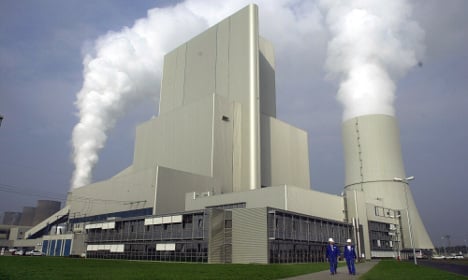 The Boxberg power plant in Germany. Photo: Matthias Rietschel/TT
One of Europe's largest generators of electricity, Vattenfall, had previously said that it wanted to focus more on greener energy sources instead of brown coal, also known as lignite.
The firm released a statement on Tuesday stating that it was inviting interested parties to put forward offers to buy its profile plants including its Boxberg, Jaenschwalde and Schwarze Pumpe, which currently have a combined capacity of more than 8,000 megawatts and employ 8000 staff.
“Vattenfall remains fully committed to its other business operations in Germany, such as district heating, electricity distribution, sales, trading and wind,” the company said.
The Swedish-owned energy firm has operations in Sweden, Germany, the Netherlands, Denmark, the UK and Finland and last year announced high losses amid tough conditions for the European utilities sector.
In March the company warned it could face asset write-downs of around eight billion kronor ($942m) as electricity prices continued to tumble across the globe.
Prices fell by an average of 22 percent in the Nordic countries and by 13 percent in Germany in 2014.
The company's renewable energy projects include the Sandbank offshore wind farm in Germany and another two land-based wind farms in Sweden. In the UK, Vattenfall is the second largest generator of offshore wind power.
Vattenfall's decision to sell off its lignite factories and mines comes amid heated debate in Sweden and Germany amid a shift towards non-renewable energy sources from both governments.
In Germany power companies had demanded subsidies to keep spare capacity active on the grid in case renewable sources generated less power than they had hoped for.
But in recent draft law in Germany, Economy Minister and Angela Merkel's vice-Chancellor Sigmar Gabriel rejected the idea of paying large energy companies to keep brown coal power plants online.
However the German government still plans to pay hundreds of millions in compensation to companies – including Vattenfall – forced to close brown coal plants between now and 2020.
This has brought Merkel's administration into the line of fire for harsh criticism from green activists and politicians, who say the government is undermining its own CO2 targets agreed at this year's G7 meeting in Bavaria.
In Sweden, the Green Party called on the previous Swedish government to avoid allowing Vattenfall to sell on the brown coal plants, arguing that the move amounted to encouraging other firms to continue producing emissions that harm the environment.
Since entering into coalition with the ruling Social Democrats, the party has argued sales could go ahead if buyers could demonstrate that their strategies included “tangible climate benefits”.
Neither Environment Minister Åsa Romson – who is co-leader of the Greens – nor the party's co-spokesperson Lise Nordin said they wished to comment on Vattenfall's announcement on Tuesday.
The brown coal plant sales process is expected to continue into 2016.

MONEY
Why is everyone talking about electricity in Sweden?
Url copied to clipboard!