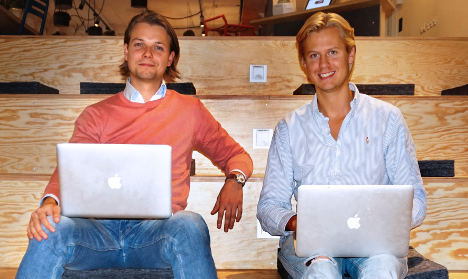 Trice founders Simon Lidén and Oscar Hentschel. Photo: Private
While not everyone using Tinder will be able to identify with Simon Lidén and Oscar Hentschel's experience of “getting hundreds of matches”, the two 23-year-olds' critique of the world's biggest dating app could well sound familiar to people swiping in Sweden.
“When we met at business school in 2013, Tinder had just arrived and everyone was using it and loved it. But among all our friends we noticed that while everyone was swiping, people were only actually talking to one or two people,”  Lidén tells The Local.
“It felt a bit forced to contact people in text form…not really like a normal conversation.”
For anyone who hasn't been on Tinder (although we're betting that if you're under 30 you'll almost have certainly tried it out on a friend's phone if not your own), it offers you the chance to swipe right if you like someone or left if you don't. If you get a match you're able to chat with one another. But as Lidén argues, that might not be as easy as it sounds in a country where small talk is usually kept to the bare minimum and modesty is celebrated.
“We are a Swedish team and so we discovered some tendencies specific for users here…We felt that something about the way you communicate [on Tinder] wasn't really right for the Swedish market which is more shy and stiff.”
Yet at the same time, the duo found themselves and their friends embracing Snapchat, the social media app that allows users to send photos and videos to followers which disappear after a few seconds, and has a growing user base among technology-loving young Swedes.
“We realized that our problem had already been solved,” explains Lidén.
Enter 'Trice – Match and Snap!' the pair's startup venture that combines a swiping tool with an interface that also lets you ping pictures and clips to people you match with and use a symbol to alert them when you're out partying (avoiding the standard “out tonight?” message popular among less original Tinder users). Any shared media disappear from the app 24 hours later.
READ ALSO: How to never be single again in Sweden What the app looks like. Image: Trice
“With pictures it's easier to make conversation,” says the former business student.
“Say for example you sent me a picture of you in a cool hat or a picture on the beach. It's much easier to chat about your surroundings, like you would if you met someone in real life.”
It's a convincing argument and Lidén is frank when he admits he has “no idea” why other photo-based dating apps have yet to take off in Sweden despite the fact that many Tinder users quicky turn to alternative solutions such as Whatsapp or Facebook in order to communicate with their matches using pictures and videos.
While he remains tight-lipped about Trice's user base, Lidén says that the new offering has prompted 30,000 swipes since its official launch a week ago and has already caught the eye of at least one so-called “angel investor” who could potentially help finance the project.
In the meantime both he and Hentschel are living off the last dregs of their student loans alongside personal savings, having finished their studies in July.
But the born-and-bred Stockholmer appears confident that financial rewards will come from developing their idea in “one of the best tech cities in the world”, despite numerous other dating apps also hitting the Swedish market in recent months. Tinder has 50 million global users. Photo: Tsering TopgyalTT
Happn, which first caused a stir in France in 2014, arrived in Sweden earlier this year with a tagline of 'find the people you've crossed paths with', which it does by revealing other singles within a 250 metre radius.
And earlier this month Swedish clothing brand Björn Borg launched Sprinter, an app designed to help users 'sweat, swipe and socialize' by connecting potential workout buddies but which has quickly been adopted by some users as a new way of seeking out sex with other fitness fans.
“Yes, there is Happn and there is also Hinge and Bumble and others,” says Lidén.
“There are plenty of rival apps that have taken on the swiping aspect and some of them bring innovation in terms of how you find people, such as through common interests or crossing paths. But there hasn't been this kind of innovation on the communications part. We believe we are the first ones,” he says, referring to Trice's photo and video function.
READ ALSO: Ten Swedish dating sites you should know about
Lidén also argues that the plethora of dating options for Generation Y is in fact a “huge plus” in a world where the whole point of signing up to new applications is to meet a wider range of people.
“With Facebook and Instagram for example, users want to be where their friends and family are and so the competion [in the social media development market] is hard. But among our friends using dating apps we saw that people sometimes had three or four or five apps. We hope this [dating app] trend will become even bigger so we can be part of it. We don't mind if our users keep Happn as well!” he laughs.
Lidén's advice to those testing out any new technologies as a way to flirt or find a new relationship is to “just be yourself” and he's convinced that he and Oscar Hentschel's invention provides the perfect platform for singles in Sweden.
“What's really positive about Trice is you can really show your life. If you spend time at home reading books you can share photos of that or you can show pictures of you doing sports. You'll also get a window into someone else's life, without everyone having to describe it in writing. It will be more natural.”
With swiping and photo sharing already a huge part of daily routines for so many young Swedes, it doesn't sound like a huge leap. But first this startup's got to be viewed as hot enough to score a heart from those angel investors.