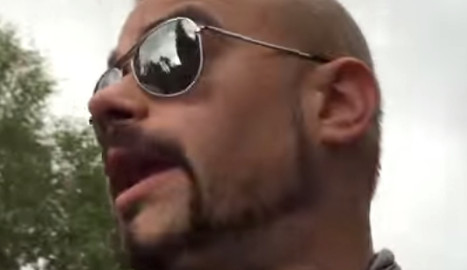 Joakim Brodén, singer of the metal band Sabaton, is recording a video diary of his journey on foot, asking fans to help him on route by giving him a place to stay.

“I got drunk as hell at a party last night and I've got a hangover,” Brodén says at the start of the video. “We did some stupid stuff. I made a bet with my bandmates that I would walk, or run, to our next show.”

The day after the bet, Brodén was unaware that their next show was in Norway, where they will be performing at Trondheim Metal Fest from October 1st to October 3rd.

“I wasn't aware that it was Trondheim,” he told Norway's trd.by entertainment site. “It started like a joke, but now it's deadly serious. After this walk, I will be in the best shape of my lifetime.”

Sabaton's 2008 track Cliffs of Gallipoli made it to number one in the Swedish singles chart, although their last album, 2014's Heroes, peaked at number 59.

In his video, Brodén asks fans for help en route.

“So, if you see a homeless Swede walking along the E16 [motorway], or the E6, it would be great if you can offer me a beer, or maybe some food too.”

Brodén is even choosing to take a detour via Vormsund in Norway to rest for a few days with friends before continuing his long walk.
Url copied to clipboard!