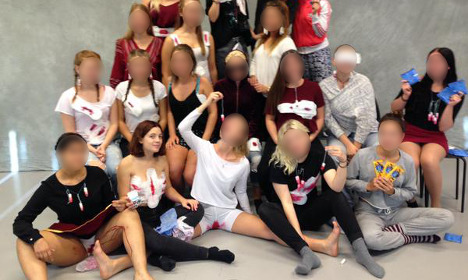 The pupils at the high school near Stockholm said that they initially came up with the idea of dressing up in fake blood, tampons, hygiene pads and chocolate as a “fun thing” to promote talking openly about menstruation.

But the stunt got viral traction when the principal banned the provocative theme from featuring in the year book after the photographer refused to take their picture.

“At first we just thought the picture would be a fun thing to do. We didn't think at all that it would be a big thing, because we don't think it is a big deal – it's just menstruation,” explained Ida Pettersson, 17, who was one of the pupils behind the idea.

The group photograph went viral in Sweden after feminist television personality Clara Henry – who has been campaigning to break taboos surrounding menstruation – shared it on Twitter. But while the youngsters' initiative was lauded by many, some social media users blasted the fake blood as “disgusting”.

“Unfortunately we have received a lot of hatred but much, much more love from people,” said Pettersson.

The school refused the picture on the grounds of its policy that all pictures in the yearbook should be “representative and easily accessible to any beholder”, a condition education bosses argued the pupils' initiative did not meet.

“I wholeheartedly support what they wanted to highlight. But we have a number of opportunities to raise this issue – the school catalogue is not the right forum,” the principal told the Aftonbladet tabloid after the picture went viral in Sweden.

Pettersson told The Local on Tuesday that she and her fellow pupils wanted to move on after the public debate and requested that the name of the school remained anonymous. But she added she was pleased that the issue had been raised.

“We really did not think it would become such a big thing, but it did and it is so cool that our story has been spread so much and that we have been able to take up the space we have. We have received so much positive feedback and we are so happy about that,” she said.

“The fight continues!” she added.

The menstruation row comes just weeks after a class in Ronneby in southern Sweden had their school photo banned after they set out to spark debate about gender stereotypes with a cross-dressing picture.