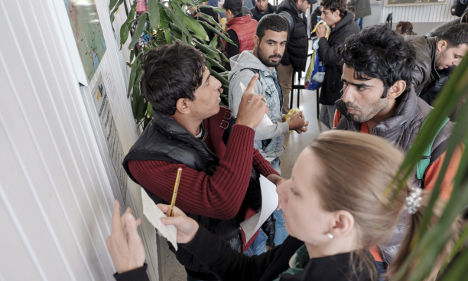 The minister, who is also the founder of the nationalist True Finns party in Finland, made the claims in an interview with Finnish newspaper Ilta-Sanomat on Tuesday.

His comments come amid the biggest influx of immigrants to Finland since the Russian Revolution. Hundreds of refugees are attempting to cross into Finland from Lapland in northern Sweden.

“It is still not so dangerous, but if the situation persists, it could become serious,” said Soini.

The foreign minister added that Sweden might find itself facilitating “criminal activities such as people smuggling and the terrorist chains that finance such activities”. He also suggested that this could lead to deteriorating relations between the two Nordic neighbours.

Sweden, along with other EU countries, argues that Finland, which has a population of just 5.5 million, should increase its share of refugees.

“That may be the case. But it is unthinkable that we should do this by ignoring EU rules and transporting refugees from country to country,” said Soini.

The minister was referring to the EU’s Dublin Regulation which states that the country where an asylum seeker first enters the union is responsible for registering their application and taking fingerprints.

However Swedish newspaper Aftonbladet reported that Soini softened his comments somewhat in a later interview with Finnish broadcaster Iltalehti.

“It was not the goal to attack Sweden specifically, what he said was true for the whole of Europe,” Niina Hyrsky, a press spokesperson at the Finnish embassy in Stockholm also told the tabloid.

More than 11,000 refugees arrived in Finland in the first eight months of this year, a number five times fewer than in neighbouring Sweden. But Finland’s population is half the size of Sweden's and the country – which is in recession – has argued that it lacks the infrastructure Sweden has to welcome large numbers of refugees.

Observers have in recent weeks been surprised to see so many migrants travelling through Sweden to seek asylum in Finland, given Sweden's reputation as a generous welcomer of asylum seekers.

But according to statistics, a large proportion of the asylum seekers are Iraqi and stand a better chance of being granted asylum in Finland, whereas Sweden has a stronger track record of taking in Syrians.

A total of 54 percent of Iraqi requests were granted in Finland in the first six months of the year, compared to 33 percent in Sweden. Case processing times are also shorter in Finland than in Sweden.

“Sweden is good for Syrians, but bad for Iraqis. I read that on Facebook,” Ali, a 17-year-old Iraqi asylum seeker recently told the news agency AFP.

EU interior ministers voted to distribute 120,000 refugees within Europe at emergency talks on Tuesday amid deep divisions over how to handle the continent's worst migration crisis in decades.

Finland was the only country to abstain from the vote, while Romania, the Czech Republic, Slovakia and Hungary pushed against accepting mandatory quotas.