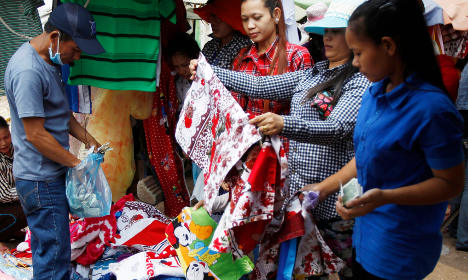 Stockholm-based organization Fair Action, which campaigns for ethically sustainable business practices, has released a report which includes quotes from workers at some of the fashion company's factories in Cambodia, talking about low wages, overtime, fear of taking sick leave and temporary contracts.

Anna Gedda, in charge of sustainability at H&M, hit back at the criticism on Wednesday, saying that the company operates according to the principle that anybody who has worked there for more than two years has a right to a permanent position.

But according to researchers a number of its factories systematically employ people using insecure contracts. Some workers also report that if they fall ill they risk losing their jobs.

“I worked very hard and never took a day off, because I was concerned by contract would not be renewed,” a 44-year-old factory employee referred to only as 'Sokny' told Fair Action interviewers. The report adds that she was recently dismissed from her position on a fixed-term contract continuously renewed over a five-year period.

Gedda declined to comment on Wednesday how many employees at its overseas factories were currently on short-term contracts.

“We have a policy not to. And it doesn't feel relevant either. The important thing right now is to make sure that all those who have been working on short-term contracts for two years get a permanent job,” she said, and added that the firm was working hard to make sure that all staff are legally employed in its factories.

“It is of course really difficult to control. It's an important issue. We can tell that things are moving in the right direction but it is an industry problem and that's why it is important that everyone works together,” she said.

It is not the first time the fashion retailer has faced criticism over the conditions in its overseas hubs. A report by Human Righs Watch (HRW) in March highlighted allegations of forced overtime, few opportunities to take a break and sexual harassment by its Cambodian sub contractors.

And the fashion retailer's work to monitor the factories is not enough, says Kärnstrand.

“We think heavy responsibility rests on the shoulders of the buyer. It's moving too slowly. H&M has been a major player in Cambodia for a long time and has known about the problems,” she said.

The textile industry in Cambodia employs around 730,000 people and exported goods at a value of 5.75 billion dollars in 2014. H&M is the largest buyer of clothes from the south-east Asian country and works together with around 80 of its factories.