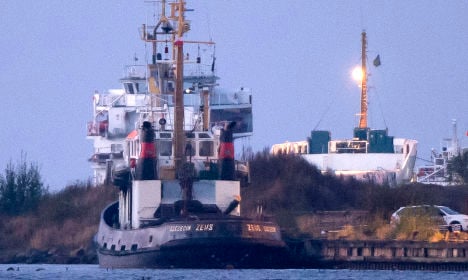 The ship after the fire was put out. Photo: Johan Nilsson/TT

Emergency services were called to the 29 metre long ship just before midnight on Wednesday following reports it was on fire.

Firefighters found two people attempting to extinguish the flames with water from the deck and another person who had suffered head injuries.

Four bodies were later discovered on board the vessel which was docked in Sölvesborg, an industrial port on Sweden’s southern coast.

“When we arrived at the location the boat was burning and we began our extinguishing work and that took quite a long time,” Melissa Millbourn, a spokesperson for the fire service in western Blekinge.

“Once we had extinguished it we went through the boat and unfortunately we found four lifeless people in cabins,” she added.

Police revealed that the men were Polish citizens.

Emergency services said on Thursday morning that it remained unclear what had caused the fire.

Sölvesborg is a small port town close Kristianstad in southern Sweden. It has a population of around 10,000.