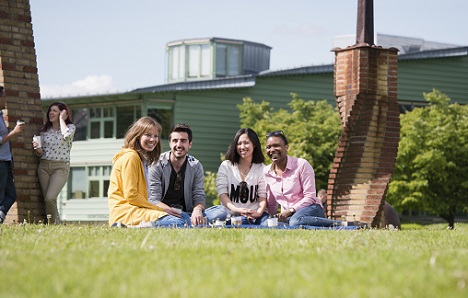 So what’s the deal? What is it that draws thousands of students from all corners of the globe to Stockholm University each year?

The Local headed to campus to find out.

1. Stockholm is the “capital of Scandinavia”

This bold claim may ignore the basic rules of geography – and has certainly irked other cities in the region – but it’s no coincidence that so many students opt to study in the hub of Scandinavian life – not to mention business and innovation.

“At first I was just attracted to Stockholm as a city, rather than a specific university,” Jasper, a business student from the Netherlands, tells The Local. “I love this city.” Koen, a student from the Netherlands. Photo: The Local

His classmate Koen, also from the Netherlands, agrees – and adds that the opportunity to experience business and economics in the Swedish capital is priceless.

“I was very interested by the economic views here,” he says. “It’s like socialism, but not quite. I wanted to see what the system is like, and how it compares to an American capitalistic perspective.”

2. “Swedes are positive and happy”

What, you say? Can it be? Yes, indeed! Swedes are positive and happy. Aloof? Cold? Reserved? Forget it, says Finnish student Jaakko.

“Stockholm has all the positive aspects of Finland, but it’s even better. It’s more organized.”

The Finn is enrolled in Stockholm University’s unique fashion studies programme, and says that studying here is a win-win for him.

“Swedes are more positive and happy than Finns. We are quite glum. I feel more Swedish,” he adds, proudly displaying his bag of natural Swedish crisps. Nothing subjective about this one. Stockholm University consistently ranks in the top 100 universities in the world– and its reputation precedes it over the Atlantic.

“I did research on the web and learned that the Swedish higher education system is one of the best in the world,” says Swedish-American student Michael, who studies French and English. “And Stockholm University has an excellent reputation. It’s a really good school.” Indeed, the university's quality is one contributing factor which makes Stockholm the 27th best “student city” in the world.

Another perk of studying in Stockholm is the nature. Stockholm boasts rolling green hills, beaches of sand and stone, unending forests, a stunning archipelago, a vibrant palette of green and blue wherever you go, and the gorgeous area around Stockholm University itself: Frescati. The lush green area is a haven not just for students studying in sunny patches of grass on any given day, but also home of the Bergianska Botanical Gardens. It’s central – and at the same time secluded from the bustle of the city, nestled away into nature.

“Every area of Stockholm is different, and there’s always something to discover,” says Zara, a political economy student hailing from Holland.

If the education isn’t enough to fill Stockholm students’ capacious brains, Frescati is. The area is also home to the Royal Swedish Academy of Sciences and the Swedish Museum of Natural History – and Stockholm as a whole has more than 30 museums, featuring everything from Vasa to Vikings to Abba and Eastern Antiquities.

Indeed, the museums and other cultural attractions of Frescati and Stockholm were another lure for Jasper, from the Netherlands.

“There are so many resources here,” he says. “The culture, the fashion, the museums.” It’s a bustling metropolitan hub – and yet it has something unique, something untarnished, compared to other big European capitals.

“It’s a great city, and it’s also less typical than many other cities like Paris or London,” Jasper remarks.

“Stockholm is the fashion capital of the Nordics,” states Jolien, who comes from Curaçao.

Jolien is enrolled in Fashion Studies at Stockholm University, and notes that it’s one of the only programmes of its kind in Europe – and certainly the only one in Sweden.

“It’s very unique. I wanted to study fashion in Europe, and Stockholm seemed like the best choice,” she says.

The Fashion Studies Master’s degree is just one of many unique programmes at Stockholm University – which also offers advanced degrees in topics as diverse as Literature with a Specialization in Lusophone Literature, Arbitration Law, Global Business Management, Demography, Glaciology and Polar Environments, and Open e-Government.

“My programme, Urban and Regional Planning, is quite special,” says Lopiso from Ethiopia. “I had an interest in urban planning from a southern global perspective, and I knew that I would get a good understanding of the topic here at Stockholm University.”

English isn’t an afterthought. In fact, the university offers over 70 different Master’s programmes in English alone, opening the doors for international students with all interests, backgrounds, and career goals. And the English language isn’t limited to class-time. Staff and students alike are internationally-minded and skilled English speakers. Stockholm University is number one in Sweden for the quality of academics’ English, and number two globally. Language simply isn’t an issue at Stockholm.

Even wandering the streets of Stockholm after class or heading to the shop or mall, Swedes are ever-eager to speak English – and good at it, too.

That’s what made all the difference for Asma, who came to Sweden from Jordan years ago but wanted to improve her life.

“I was depressed,” she confesses. “I couldn’t speak Swedish, just English, and I was unable to get a job. So I decided to go back to university.”

The English literature programme at Stockholm University was a perfect fit.

8. Relationship between teacher and students

Jean-Franco from Venezuela also studies literature at the school, and in addition to the school’s reputation and the variety of English-language programmes, he was captivated by the dynamics of relationships at the school. Jean-Franco before class. Photo: The Local

“It’s a very open university,” he explains as he gathers his things to head to class, waving to a Swedish peer. “You meet lots of international students, and lots of Swedish students as well.”

The Swedish way of interacting with professors – where everyone is addressed as equals on a first-name basis – can be jarring for some international students, but also refreshing. At Stockholm University learning is a mutual experience, not a hierarchy.

“I had never been to Scandinavia, but I have always heard a lot about the great equality and the morals here,” says Shirin, from London. “I’ve always heard that Sweden is a very egalitarian society, and I study equality law, so it’s perfect.” And as the first university in Sweden to employ a female professor, Stockholm University still leads the way.

Sweden's devotion to equality goes beyond feminism and gender equality: Sweden ranks number 2 in the world for social progress in general.

Stockholm is the biggest city in Sweden and the biggest destination for tourists in the Nordic nation, and Stockholm University is the country's largest college. Nearly 70,000 students attend the school, and the numbers are sky-rocketing. Yet classes often remain small and personal.

Students at Stockholm University get the benefits of studying in a big city, while still getting personalized attention and dozens of new perspectives.

“Stockholm University is quite well known compared to other schools in Sweden,” says Agatha, a Global Political Economy student from Hong Kong. “And everything here is very new for me. The programme, the city, the culture, the language.” Zara from Holland (left) and Agatha from Hong Kong (right) Photo: The Local

After studying in Asia, Agatha was initially drawn to the Swedish university for its size – and now she hopes to stay.

“I chose to study the same thing I studied in Asia but in Scandinavia, so I can see it from a different perspective. Hopefully that will help me in the future, because I would like to work here.”

Still not convinced? As if that’s not enough, students in Stockholm get a few special, noble perks. Or rather, Nobel perks.

Everyone knows the Nobel Prizes hail from Sweden. Stockholm University boasts five Nobel Laureates, and Professor Sara Danius was recently selected for the prestigious position of Permanent Secretary of the Swedish Academy – which is responsible for electing the Nobel Prize in Literature each year. And it doesn’t stop there. All international students are invited to a welcome reception each year at Stockholm City Hall, where the Nobel Banquet is held. But they get much more up-close-and-personal than just sharing a space. They share a nightcap. Not the kind that goes on your head, mind you.

The annual Nobel NightCap is a unique event where students in Stockholm plan a party with the Nobel laureates. Students from four student unions get to mingle with academics, politicians, and all-around world-changers in private – not even photographers are allowed inside. This year the event will be organized by the Stockholm University Student Union, giving Stockholm students an even greater chance to go Nobel.