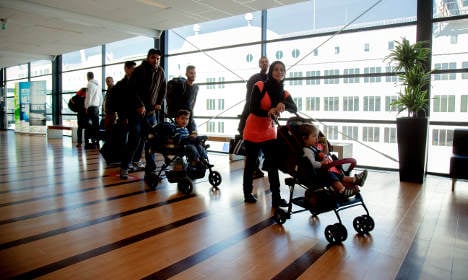 “We have seen a dramatic increase in the number of refugees seeking asylum. That's why I have told Migration Minister Morgan Johansson to urgently review what steps need to be taken,” Prime Minister Stefan Löfven told the TT newswire earlier on Friday ahead of a parliament debate on the escalating refugee crisis.

“People need to get roofs over their heads and the children have to start school,” said Löfven, who heads Sweden's Social Democrat-Green coalition government.

The Nordic nation has a global reputation for helping refugees, but it has faced some criticism within Sweden following complaints from asylum seekers about long waiting times and access to housing.

Migration Minister Morgan Johansson told a press conference on Friday that the government was looking at a range of options to house refugees, including using empty jails. Sweden has closed down several prisons in the past few years because of falling crime rates.

“We're looking at properties owned by the Prison and Probation Service and the Armed Forces,” said Johansson.

Other actions that could be taken are increased coordination with the Swedish Migration Agency, the Swedish Civil Contingencies Agency, and municipalities across the country to make sure that the new arrivals find somewhere to live. Sweden is expected to receive at least 74,000 asylum applications by the end of 2015 and last year took in more refugees per capita than any other EU nation.

Its two neighbours, Norway and Finland, have both announced increased border controls as a result of the increased migration to their respective countries. But similar measures are not on the immediate agenda for Sweden, said Löfven earlier in the day.

“It's up to the police and the security police. We have so far not received any information from them indicating this,” he told TT.

READ ALSO: Support for nationalists down amid refugee crisis

The Swedish Prime Minister spoke to reporters from New York where he is attending a United Nations summit on sustainable development. But with leaders such as Secretary-General Ban Ki-Moon, Germany's Chancellor Angela Merkel and Syrian envoy Staffan de Mistura also present, the ongoing refugee crisis is likely to be high on the agenda.

“I am also going to meet Iraq's prime minister and Iran's President Rouhani, they are important players,” said Löfven, who faces a busy couple of days in New York.

On Saturday he is set to speak at the anti-poverty New York Global Citizen Festival, where he will mingle with icons including Beyonce and Salma Hayek. The Swedish prime minister was personally invited by Coldplay lead singer Chris Martin to the event, his press secretary revealed to The Local last week.

He confirmed that the Swedish leader would focus on gender inequality, poverty and improving access to clean water and sanitation facilities in the developing world in his address at the festival.

“The Prime Minister is proud to represent Sweden, a small country that is yet so well known for its unwavering commitment to fighting inequality,” he added.