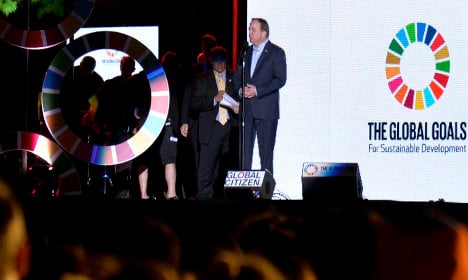 Löfven was introduced by actress Salma Hayek as “the prime minister of the world’s first feminist government,” before giving a short speech.

“I am proud to lead the first feminist government in the world. We may live in a cold country, but our hearts are big.”

Löfven then promised that Sweden would contribute to helping 60 million more people gain access to clean water and sanitation.

“Sanitation is extremely important for basic human values, and not least for equality – for girls and women to have a more secure existence.”

Löfven left the stage to an enthusiastic ovation from the 60,000-strong crowd before Beyoncé took the stage next.

The Social Democrat leader has championed a feminist foreign policy since he became prime minister a year ago. He became an international advocate for women's rights when he was appointed Impact World Champion Leader for the United Nations' #HeForShe campaign in January.

The initiative, which was later launched in Sweden, saw the Swedish leader locked in discussions with former Harry Potter actress Emma Watson at the World Economic Forum in Davos, Switzerland.

The event clearly made an impact on Löfven, who in his first official speech in Sweden after the summer holidays focused on gender equality and referred to the actress, as well as young Swedish artist Zara Larsson and US director Lena Dunham, as feminist pioneers and important role models.

Beyoncé put on a crowd-pleasing show of dance pop with an emphasis on feminist themes, but performed an unlikely acoustic duet with Ed Sheeran of Drunk in Love, which she usually sings with her husband Jay Z. Taking the microphone in between acts, the youngest-ever Nobel Peace Prize winner Malala Yousafzai dramatized the plight of girls who want to go to school.

The 18-year-old Pakistani, who was shot in 2012 for defying a Taliban ban on education, said that the world did not lack money.

“We have billions and trillions of dollars, but where the money goes is the military, things that are useless to society,” she said.

“It is a book and a pen that can change the life of a child; it is not a gun.” “Right now, Europe is paralyzed trying to absorb the influx of millions of Syrian refugees,” the actor said.

“But more than one billion people, most of them in Asia, currently live in low-lying coastal regions. What will happen when they become sea-level refugees?”

Global Citizens was founded to mark the establishment of the United Nations Sustainable Development Goals (SDGs), a “to-do list” of 17 tasks to end extreme global poverty by the year 2030.

Chris Martin, of Coldplay, who is the current creative director, invited Löfven to speak at last night’s event.