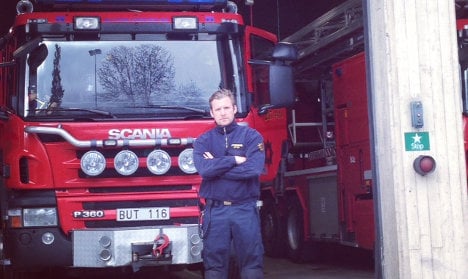 Jeffrey King, 41, has been a firefighter in Sweden for more than a decade. Photo: Private
Back in 2003, Jeffrey King was having a hard time adjusting to living in Sweden after relocating here with the love of his life, a Swedish woman he met on a backpacking trip to Guatemala.
“I'd been here for a year and I was still struggling to use Swedish,” he tells The Local.
Having worked for Surrey Fire and Rescue Service in the UK, he found himself being shunted between temporary jobs in Stockholm, working for removal and delivery firms as well as in sales.
“It was a really big moment. I had to decide whether I wanted to move back or not. But then I turned round to myself and thought 'what can I do to make this work?'. In situations like this you have to decide whether to face the challenge or not…for me I always enjoy a challenge,” he laughs.
King went back to his books and spent the following year trying to become fluent enough in Swedish to return to his passion: fighting fires.
“Communicating is so important,” he says, explaining the need for excellent language skills in his role, even in a nation where English is so widely spoken.
“Speed is very important and you're also under a lot of stress, when it's easy to revert to your native tongue.”
His study efforts paid off.
In 2004 King scored a job with the Swedish Fire and Rescue Service and ended up working on some of the most high-profile emergencies of the last decade.
These included a runaway train that made global headlines after it ploughed through 70 metres of snow and crashed into a family home in eastern Stockholm in 2013, and a wave of arson attacks that destroyed three supermarkets in Södertälje, south of the Swedish capital, in 2009. The Saltsjöbaden rail crash made international news in 2013. Photo: Anders Wiklund/TT
“People often ask if I think I've worked on fewer big things than I would have done if I had stayed working in the UK, but I don't think that is the case!” he says.
While the 41-year-old clearly found it fulfilling to be working out in the field, he is now a station officer in Haninge, south of Stockholm, where he manages a team of firefighters.
“I think I probably progressed more quickly than if I had been back home,” he explains.
“It's a smaller fire service and there is less hierarchy and it's more flat. So when you do involve yourself in different things it's easier to get noticed.”
While it's not uncommon for expats to struggle with making friends in Sweden, King says he's enjoyed getting to know his Swedish colleagues and also cites his rugby club, the Stockholm Exiles, as a major source of support outside of work.
“One of the reasons I stayed in Sweden after that first year was because I had other things in my life,” he tells The Local.
“A lot of the players were expats in a similar position. We all helped each other with jobs and Swedish and things and our partners got to know each other,” he adds.
“Expats I have met are maybe more open from the beginning, which makes it easier to become friends. But I have Swedish friends too. When you befriend a Swede properly, after a while they'll be very, very good friends.”
READ ALSO: Seven tips for making firm friends in Sweden
King, who has two daughters aged six and seven, says he was also drawn to settle down in Sweden due to “much more affordable childcare” than in the UK as well as the country's education system.
“Not just smaller classes, but also just the whole process of how you get your children into the school you want seems easier here than back home, when I hear what my sister has been going through.” King's daughters learning about his career. Photo: Private
But despite his now deep roots in the Nordics, King says his family is considering a temporary move back to the UK.
“We have been discussing perhaps returning for a little while, so my children can get to know my family and my parents. But it probably wouldn't be a permanent move because the quality of life is just so much better in Sweden.”
As for the Swedish Fire and Rescue Service, he says he would “totally recommend it” to any Brits or other foreign firefighters willing to put in the time to learn the local language.
“Yes, come and work here!” he says with a chuckle.
“Actually we are recruiting right now…but Swedish is a must.”