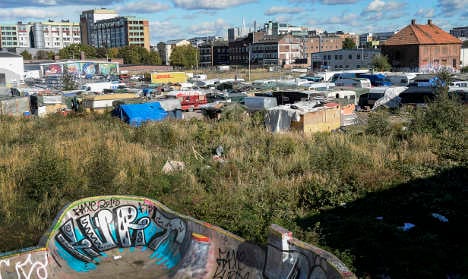 The camp this summer. Photo: Anders Wiklund/TT
Hundreds of migrants have been living in tents, caravans, shacks and cars in an industrial area in south east Malmö for months.
But police admitted on Monday that their investigation into what is believed to be Sweden's largest shanty town had been delayed due to a wave of violence in the Swedish city over the summer.
Mats Karlsson, Malmö's deputy police chief, told Swedish newswire TT that he was aware that permanent residents were becoming concerned about the camp and what to do if they found EU migrants camping on their property.
He said that it was “certainly” the case that police would step in to help people who were worried.
“We will complete this investigation,” he added.
READ ALSO: Meet northern Sweden's frozen Roma beggars
Under Swedish law both locals and visitors alike currently have the right to walk or camp on almost any land, although this does not include public land that is adjacent to residential property or privately-owned gardens.
The case of the camp in Malmö is unique because the person who owns the land tolerated the migrants – who are mainly Roma people from Romania and Bulgaria – for six months before launching a trespassing case with police.
In April, Malmö's environmental health board (miljöförvaltning) voted to ban fires and littering on the camp. But the decision was rejected, firstly by the regional government and then by Sweden's land and environment court (mark- och miljödomstolen), which argued that any case needed to be directed at specific individuals.
“It is not just about the camp in Malmö. It is important for us to get the laws clarified, what paths we should go down if this situation occurs…once and for all, we need to get it clarified in court,” a lawyer for Malmö city, Andrea Hjärne Dalhammar, told TT.
“It feels as if the courts just want to drop a hot potato quickly,” she said. The camp this summer. Photo: Anders Wiklund/TT
READ ALSO: How police are tackling Malmö's wave of violence
Sweden's national government recently announced it was set to appoint an investigator to review the country's regulatory framework for eviction.
Some municipalities in other parts of Sweden have already evicted groups of Roma from public land including in the capital, Stockholm.
On Monday Roger Haddad, a member of parliament for Sweden's centre-right Liberal party submitted a written request to the Swedish government demanding immediate clarification of the law and suggesting that authorities in Malmö had been “lazy”.
Research by Swedish broadcaster SVT in April 2015 suggested that the number of EU migrants from Romania and Bulgaria had more than doubled in the preceeding 12 months, to around 4,000 people.
Many of the migrants say they are fleeing poverty in their home countries and the Swedish government is cooperating with authorities in Romania to try and help the most vulnerable.