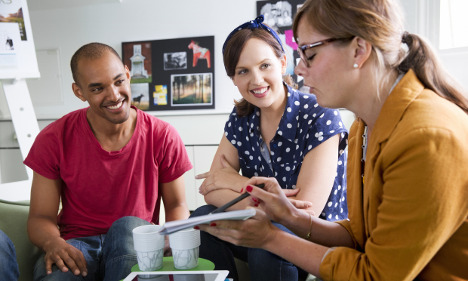 A Swedish office. Photo: Lena Granefeldt/TT
In a preliminary version of its annual report on the Swedish economy, the Washington-based institution highlighted the difficulties immigrants encounter in finding work in the Nordic nation. It also said that those fleeing conflict and hardship by moving to the Scandinavian state could help Sweden secure its welfare model.
“The Swedish labour market has become increasingly polarised. Although overall employment is high, unemployment falls heavily on the low-skilled and the foreign-born,” noted the IMF.

The IMF urged Sweden's social partners to consider ways “to ensure that entry-level wages are not a hurdle for groups with high unemployment to gain work, for example by introducing special wage scales for those needing on-the-job training or by enhancing flexibility at the firm level.”

“Partners should also review employment protection for regular contracts so that these exit costs do not deter firms from giving opportunities to new entrants with sufficient skills,” the report said.

Sweden has one of the highest differences in employment levels between natives and immigrants in the OECD (Organisation for Economic Cooperation and Development): 63.5 percent of foreign-born people held down a job in 2014, compared to 77.7 percent of those born in Sweden. The OECD explained the difference by the low number of low-skilled jobs available to immigrants “from countries with failing education systems”, such as Iraq, Afghanistan, Eritrea and Somalia.

And yet, “strong migration inflows are an opportunity to secure Sweden's social model”, the IMF said.

It urged the country to invest in the construction of much-needed housing, as well as the education and training of young immigrants.

“Employment programs for youths — which combine work and training — should be expanded to help newly-arrived refugees gain their first job and build needed skills,” the IMF said.