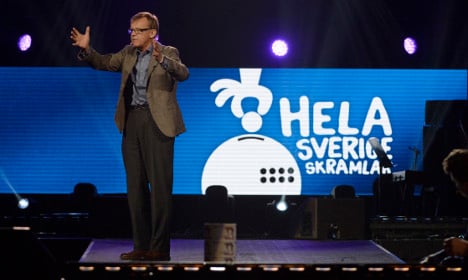 Hans Rosling on stage in Stockholm. Photo: Jessica Gow/TT
More than 60 Swedish celebrities appeared in front of a packed Globe Arena (Globen) in Stockholm on Tuesday night, for a charity concert to raise money for refugees. They included some of the country's most globally successful female vocalists Seinabo Sey and Sanna Nielsen as well as singer-songwriter Joel Alme.
But the fundraiser, for the organization Radiohjälpen, which is linked to Sweden's public broadcaster SVT, included a surprise guest, who sent Twitter into meltdown.
Hans Rosling, Sweden's iconic medical doctor, academic and statistician took to the stage to give an impassioned lecture on the funding he believes is essential in order to tackle the global refugee crisis that is mushrooming as fighting continues in Syria.
“You guys are 12,000 people here inside Globen. Imagine that you are the Syrian population, 24 million. Each of you represents 2000 Syrians. Out of Syria's population just over half of the population still live in their homes. Only you lot in the balcony can stay in your homes,” he said, during his speech, which was also broadcast live on Swedish television.
The globally famous public speaker then ordered technicians to put spotlights on different sections of the audience to demonstrate the plight of Syrian refugees.
He said those in the stalls represented “the four million who have left the country and live in border countries and refugee camps there”.
The front section corresponded to the 300,000 displaced people in Europe, just three percent of the Syrian population, he added.
“And you on the first three rows, you represent the refugees who have come to Sweden. Welcome.”

My talk in Swedish last night on why UNHCR must get more money now to help Syrian refugees: http://t.co/AyyeBT4we8

The 67-year-olf professor was given a raptuous applause before he went on to praise the “courage and determination” of refugees who risked their lives in order to seek asylum in the EU.
But he criticized the European Union's Dublin regulations, which demand that refugees seek asylum in the first European country they are registered in, and the difficulties many face in securing travel visas in advance of their journeys.
“It's embarrassing, sorry. That you pay such high amounts of money to go on these boats instead of travelling by plane, which you're not allowed to.”
Hans Rosling ended his appearance by thanking the audience, before noting that he did not know much about the music being performed at the concert. He received a standing ovation. Swedish songstress Seinabo Sey also appeared on stage. Photo: Jessica Gow/TT
READ ALSO: Hans Rosling – 'You can't trust the media'
Swedes rushed to social media to share their support for the statistician, with SVT's round-up article of the speech shared almost 15,000 times by Wednesday lunchtime.
Several Twitter users suggested Rosling should run for president (a role that doesn't currently exist in Sweden), while another reflected that he was “Sweden's wisest and most important man”.

Sweden last year took in more refugees per capita than any other EU member state and recent polls suggest that the majority of people living in the Nordic nation are in favour of increasing help for refugees.
On Sunday, 44 percent of respondents in an opinion poll undertaken by Ipsos said they believed that Sweden should take more refugees – an increase of 18 percentage points since February.
Meanwhile support for the country's nationalist Sweden Democrat party has stalled in recent weeks.