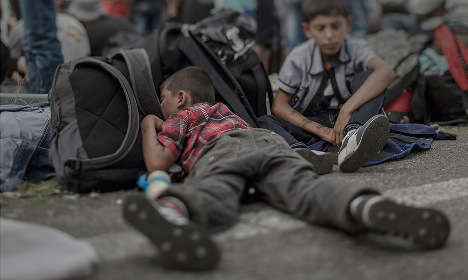 Ahmad, 7, lays among thousands of other refugees on the highway leading to Hungary’s closed border. Photo: Magnus Wennman
Why did you take these photos?
My aim is that people will react and feel something and to hopefully make a lot of money for the UNHCR. I wanted to show that children need a safe place to sleep. I started taking my photographs in February, before the photo of Alan [the three-year-old found dead on a Turkish beach]. It is hard to know which images will reach through. We have already seen a lot of people dying in the war. I think Alan was one of those that came just at the right time.

A young Syrian boy holds his mothers hand after crossing the border from Serbia to Hungary. pic.twitter.com/ekAzAUrSVs

Your pictures have already gone viral in Sweden, did you expect this response?
I am actually a bit overwhelmed about the reaction and all the interest from all over the world. But it is very important as a journalist to get your work published and to get people to care about it. That's the most important thing to do.

Heart-wrenching stories of the youngest victims of #Syria's war: Where the children sleep http://t.co/dGjMXq6FjW #Darbarnensover @UNHCR_NE

Which of the photos was most heartbreaking to take?
I can't really answer that one single picture meant more to me – all of them touched me a lot – they all have different stories. But the situation that really affected me was that day in Hungary when they closed the borders…It was so obvious that those who had made it there the day before had been let through, but then the ones who didn't were left stuck behind an iron gate. People had to sleep on the road and in the forest. Some didn't have things to eat and some children had to pick apples from the trees.

Sweden has a strong international reputation for helping refugees, how do you feel as a Swede covering the refugee crisis?
Well I don't know if I feel different from anyone else in the sense that I feel very much for these people [refugees] and I am very glad to come from a country that accepts a lot of refugees. I wish more countries could do more. There is a lot of positivity from people when you say you come from Sweden…they want to go to Sweden and to Germany especially. Most of them are really hopeful about coming to Sweden and have a good image of Sweden. I met people who were really frustrated they couldn't get into Hungary and move onwards. They just wanted to get somewhere where they could feel safe and sleep in a real bed. They were so frustrated. Fatima, 9, who now lives in Sweden but spent two years in a refugee camp in Lebanon. Photo: Magnus Wennman
What do you think politicians should do as the crisis continues?
I don't really want to talk about politics, but what I can talk about is what I see and what I feel. One thing I have made clear is that what is happening in Syria is a very complicated conflict and it is hard – even for a journalist like me – to understand everything about it, even if you read a lot. But it is not hard to understand that children need a safe place to sleep. If people are starting to care more, then I am happy.
See all of Magnus Wennman's photos on Aftonbladet or visit his exhibition at Fotografiska museum in Stockholm between September 30th 2015 and January 24th 2016
Url copied to clipboard!