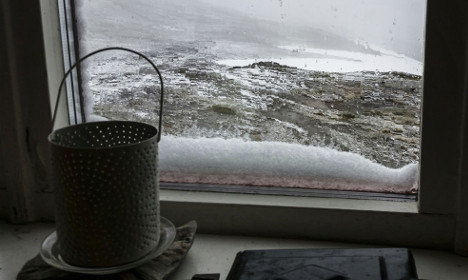 Snow in Swedish Lapland earlier this month. Photo: Malin Hagberg/TT
Sweden's national weather agency SMHI has predicted that very strong gusts of wind will be swooping into northern Lapland and Jämtland by Friday.
“It's going to be very blowy and along with that there will be precipitation, mostly as rain but in the mountains of Lapland there will also be hints of snow,” Sandra Andersson, a forecaster at SMHI, told Swedish newswire TT on Wednesday.
“In Norrland, it looks like it could be quite windy on Friday,” she added.
Meanwhile Finnish news agency FNB predicted winds in the region would reach gale force ahead of the weekend.
SMHI has issued eight class one weather warnings for eastern and northern Sweden, the lowest of three warning categories used by the agency.
Parts of Sweden have already turned white as the winter creeps closer.
Låktatjåkko mountain station near Björkliden in Swedish Lapland reported its first snow on September 4th.
Meanwhile Tarfala in northern Sweden officially missed out on summer, going straight from spring to autumn, reporting fresh snow in the middle of August.
The latest cold snap could affect the turnout at two rallies planned on the Swedish-Finnish border on Saturday.
One is a protest against the recent rise in migrants arriving in Torneå in Finland from twin city Haparanda in northern Sweden, while the other is a counter demonstration in support of the refugees.