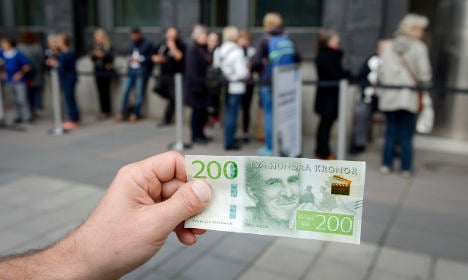 Swedes queue to get hands on new bank notes. Photo: Jan Ericsson/TT
The Nordic nation has introduced 200-kronor notes and launched updated versons of 20, 50 and 1,000 kronor cash as part of its biggest currency changeover in decades.
The new money features Swedish legends including director Ingmar Bergman, actress Greta Garbo, and children's author Astrid Lindgren.
“The notes we have today have been around in various forms for about 30 years. We have always worked to update the security features of the bank note, but at some point you reach a point when it isn't meaningful any more,” said Stefan Ingves, governor of Sweden's central bank, the Riksbank, at a press conference.
The new kronor notes each include a 'KR' symbol in the top right hand corner, which changes colour when you wiggle them, in a move designed to make the money more difficult to forge.
“You can quite easily see if it's genuine,” added Ingves.
He made the first purchase with one of the new notes, using a 200 kronor bill to pay for a copy of a children's book in the popular Swedish Pippi Longstocking series, for his granddaughter. The new notes. Pontus Lindahl/TT
Those super keen on getting their hands on the new currency queued up at the Riksbank in central Stockholm on Thursday afternoon.
The notes will be available from 80 select ATMs this week and eventually nationwide from 2016.
The areas where you can cash in on the new notes first are: Borlänge, Enköping, Gävle, Göteborg, Hedemora, Huskvarna, Jönköping, Kalmar, Karlskrona, Kramfors, Kristinehamn, Lindesberg, Linköping, Lyckeby, Malmö, Nässjö, Olofström, Sandviken, Skellefteå, Stockholm, Sundsvall, Sörberge, Timrå, Umeå, Visby, Västervik, Västerås, Växjö and Örebro.
IN PICTURES: Sweden's new bank notes The new 200 kronor note featuring Ingmar Bergman. Photo: Fredrik Sandberg/TT
New coins will also be arriving in Sweden next year, including a brand new two kronor. A fresh set of one and five kronor coins will also be introduced, while the ten kronor coin will be the only currency that doesn't get a makeover.
Today's 20, 50, and 1,000 notes will no longer be valid after June 30th 2016. The current 100 and 500 will be invalid after June 30th, 2017, together with the 1, 2, and 5 kronor coins.
Swedes have become less dependent on cash in recent years and as The Local reported last year, four out of five purchases in Sweden are made electronically or by debit card.
Researchers from Oxford University discovered in 2013 that Sweden's cash was among the filthiest in Europe, with bank notes containing more bacteria than all others across the continent.

PARTNER CONTENT
How to pay less when sending money abroad from Sweden
Url copied to clipboard!