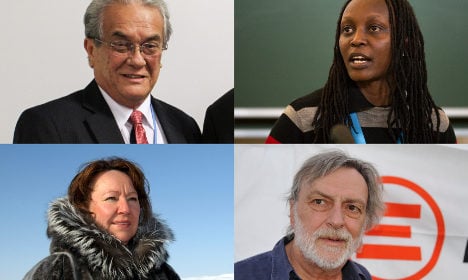 The awards will be handed out at the Swedish foreign ministry, a year after the civil rights group was banned from its premises when it picked controversial whistleblower Edward Snowden as one of the 2014 winners.

“We're likely to receive applause for these laureates who criticize nuclear states and the government of Uganda, but when it comes to powerful states like the US, the government has a completely different stance,” said Right Livelihood Award director Ole von Uexkull.

Watt-Clouiter was honoured for her “lifelong work to protect the Inuit of the Arctic and defend the right to maintain their livelihoods and culture, which are acutely threatened by climate change”, the jury said in a statement.

She shared the prize with Nabageserales, who fights for the rights of lesbian, gay, bisexual, transsexual and intersexual (LGBTI) communities in Uganda and Italian doctor Gino Strada who founded the medical charity 'Emergency' which helps rehabilitiate war victims.

Meanwhile, the foreign minister of the Marshall Islands, Tony de Brum, and the islands' entire population won the Right Livelihood Honorary Award for “their vision and courage to take legal action against the nuclear powers for failing to honour their disarmament obligations under the Nuclear Non-Proliferation Treaty”.

Von Uexkull said: “This year's Right Livelihood laureates stand up for our basic rights  – be it the rights of indigenous peoples or LGBTI communities, or the right of all citizens to live in a world free from the scourges of war and climate chaos.”

“In this year of global humanitarian crises, they provide an inspiring response to the defining challenges of our time,” he added.

They were introduced “to honour and support those offering practical and exemplary answers to the most urgent challenges facing us today”, according to the Right Livelihood Award Foundation, which often calls its distiction the “alternative Nobel prize”.