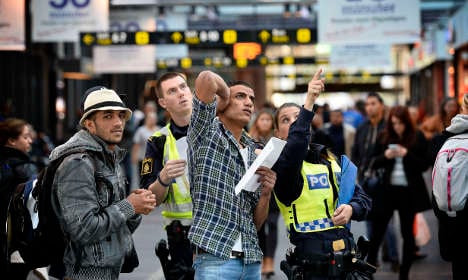 Refugees at central station in Malmö. Photo: Anders Wiklund/TT
While other Scandinavian countries have sought to limit immigration in the wake of the global refugee crisis, Sweden's government has committed to providing extra funding and maintaining its open borders.
But the country's capacity for dealing with the large numbers of asylum seekers heading to the Nordic nation was called into question on Friday, as new figures emerged about the rush of new arrivals.
According to official statistics quoted by the TT news agency, 73,000 people had applied for asylum in Sweden by the end of September, close to the 74,000 expected in the country in the whole of 2015.
Last month alone, 24,306 people sought asylum in Sweden, a historically high figure that included 1,300 people on one single day.
“It is clear that it will cost us more money than we thought,” admitted Sweden's Minister for Migration Morgan Johansson, just weeks ahead of the Social Democrat-Green coalition's budget announcement.
Under previously announced financial plans, the government allocated 17.4 billion kronor for immigration-related issues in 2015 and predicted 19.4 billion would be needed next year. It has also put aside extra money for municipalities to help new arrivals to integrate into Swedish society.
Johansson said he would not speculate on how the figures might change ahead of the government's formal budget announcement later this month.
“Right now shelter is the biggest challenge. It's about how to get housing for a thousand people a day. There is a huge logistical challenge,” he said.
READ ALSO: 'My Europe takes in refugees' says PM Migration Minister Morgan Johansson. Photo: Claudio Bresciani/TT
The minister also noted that large numbers of children were arriving in Sweden without their parents.
“The relocation of the unaccompanied children is a very, very big challenge,” he explained, appealing to Swedes willing to foster some of the younger arrivals to open their homes.
“I think there are quite a few Swedes who would be willing to receive any of these children,” said Johansson, adding that he hoped that the nation's volunteering sector would also step up its efforts alongside those of the government.
“We in Sweden have several advantages. We are an organized country, we have relatively strong public finances and strong social movements, that make many people organize themselves on a voluntary basis. That's how we can handle this situation.”
READ ALSO: How to help refugees if you live in Sweden
Johansson's comments come a week after Sweden's Prime Minister Stefan Löfven called on his migration minister to “urgently review” what steps needed to be taken to tackle what he called a “dramatic increase in the number of refugees seeking asylum”.
“People need to get roofs over their heads and the children have to start school,” he added.
One initiative that is being looked into is using some of the country's empty prisons to house some of the new arrivals. The government also wants to fast-track proposed legislation to force local authorities to accept refugees.
Sweden's opposition centre-right parties have largely backed the government's efforts to help refugees, while polls suggest that support for the nationalist Sweden Democrat party is stalling in the Nordic nation.
In 2014, Sweden took in more refugees per capita than any other EU nation.