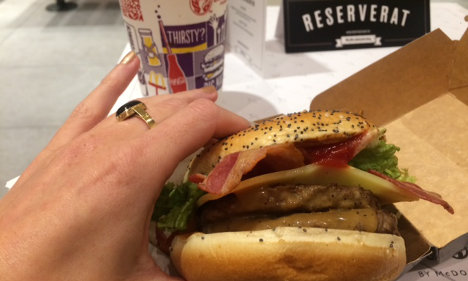 The Maestro Classic burger. Photo: The Local
A thick black rope seals off the brand new reservations area inside the Fridhemsplan branch of McDonald's in Stockholm as a teenage girl and her family eagerly await their first taste of the international chain's gourmet burger.
Like thousands of others visiting more than 30 restaurants around the country, they prebooked their table online as the largest fast food company on the planet tests out a slower pace.
For the past two weeks, Swedish residents keen to try the firm's new gourmet beef and chicken burgers have been able to reserve evening seating for up to four people using the popular website Bookatable.se.
“It's a new burger and I just wanted to see how it tastes,” explains Selda Potelli, 15, who says she first heard about the trial on the company's Facebook page.
While she is clearly enjoying tucking into the new potato wedge-style fries that come with the dish, she doesn't appear to be overly taken with the new Maestro Classic beef burger, which includes two thin 75g sirloin patties, poppy-seed topped bread, cheddar cheese, crispy bacon, wild mustard sauce, ketchup, red onions and salad.
“I like it, but it's not as good as my favourite [food], Mexican…And other fancy places that sell gourmet burgers, they will beat McDonalds,” she argues. Selda Potelli in the reserved seating area. Photo: The Local
McDonald's has not openly admitted that it is hoping for a bite of the boutique American food scene that's hot in growing numbers of European cities right now. But as Stockholm-based food and travel blogger Sandra Carpenter argues, for those who understand the restaurant sphere in the Nordic nation, Sweden is an obvious place for McDonald's to target the competition.
“Burger places are trendy. Here in Stockholm you've got got Lily's Burger, Prime Burger, ,Phil's Burger. The one most people mention is Flippin' Burgers although it's not my favourite. There's also Käk [in hipster neighbourhood Hornstull],” she explains.
“The Swedish capital has always been a big food city…when somewhere new opens up it always gets booked up for weeks. Plus this is a place where people are used to doing everything and booking everything online,” she adds.
However she says she isn't convinced that true foodies will be rushing to click for a table at the global burger giant.
“I don't know…I'm not sure who they are targeting here although I am sure it will be cheaper than what you can get at gourmet restaurants where a burger can cost up to 200 kronor ($24).” The new gourmet burger is still served in typical fast food packaging. Photo: The Local
McDonald's gourmet burgers sell for 82 kronor ($9.78), although as part of the company's online booking marketing push, diners signing up to participate in the reserved seating trial are being given theirs for free, in a (now-not-so) surprise gesture.
“We see customers who are extremely appreciative for the chance to visit their favourite restaurant and get treated a little bit more special. Plus, they’re among the first in the world to try the new Maestro Classic hamburger,” says Jeff Jackett, Marketing Director with McDonald’s Sweden.

“Yes, I would say that we will repeat this. No specific time frame, but we will definitely repeat this,” he concludes.

But out in the regular section of the fast food joint, most customers seem both unaware of the current stunt and unlikely to join in if it gets extended.
“I don't think it will succeed with its goals,” says 18-year-old Martin Ericsson.
“The thing with McDonald's is that they have gone on with the same thing for all these years and now if they want to change, people will be like shocked…people will scratch their heads and think 'what's going on with McDonald's nowadays?',” he adds.
“Hipsters in general, they want to be first with everything, so of course they will come here and try it but I don't think they will become regulars just because they change the way of serving people.” Martin Ericsson (left) with his friend Olaf Petterson. Photo: The Local
IT consultant Fredrik Michael, 39, who decided to taste the Maestro Classic during a solo visit to the chain at Fridhemsplan after a busy day at work, says he won't be eating it again.
“I'd been told that it was some kind of luxury burger or something…it was just kind of a lot of meat. To me it was nothing special at all.”
But he believes the online aspect of McDonald's new campaign could be the perfect concept for his home country.
“I have noticed from my friends, they tend to hang around on the trends, being always [technology] pioneers…so many of them have tried the online stuff,” he said.
It's a theory that blogger Sandra Carpenter also agrees with.
“Swedes love technology and they can be quite shy…Maybe the reason that online bookings are so big here is because some of them feel uncomfortable picking up the phone. So in that sense, who knows, maybe there is a chance McDonald's idea could take off.”