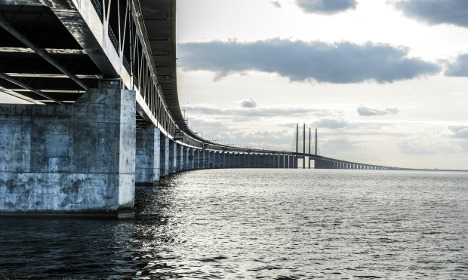 The Öresund strait, close to where the ship was spotted. Photo: Janus Langhorn/Image Bank Sweden
The warship was seen close to southern Sweden's largest city, Malmö, at around 7pm, reported witnesses speaking to regional newspaper Sydsvenskan.
The paper printed a photo of the vessel, which showed it had a number of towers and appeared to display Russian Navy symbols.

A spokesperson for the Swedish military told The Local on Friday that a ship seen in the area had indeed come from Russia, but had every right to pass through Swedish and Danish waters.
“The ship was involved in a totally normal right of passage,” said Marie Tisräter, an information officer for the Swedish Armed Forces.
Jenny Larsson, a spokesperson for the Swedish Coast Guard confirmed the same information to the TT news agency, adding that she accepted that the vessel's actions “may seem provocative”.
The Öresund strait, which separates Malmö from Copenhagen is an international shipping zone. Foreign vessels are allowed to pass through as long as they do not behave “menacingly”, according to the rules of the Öresund treaty, signed in 1857.
READ ALSO: 'If the Russians come out whole lifes will change'
Tensions between Sweden and its eastern neighbour have intensified in recent years. In 2014, Sweden's Security Service Säpo said in its annual report that Russia was the biggest intelligence threat against the Nordic nation.
A year ago, a foreign submarine – suspected to be from Russia, although this was never confirmed – was spotted in Swedish waters just outside Stockholm. A second underwater sighting was later reported and a number of Russian planes have also been spotted in or close to Swedish airspace over the past 18 months.
Sweden's government announced earlier this year that it was set to invest 10.2 billion kronor into its armed forces. It has also stepped up its exercises with Nato and moved to secure closer military ties with neighbouring countries.
But the country's defence capabilities have been questioned following comments from former Supreme Commander of the Armed Forces Sverker Göranson that Sweden could only defend itself for a week if it were attacked.