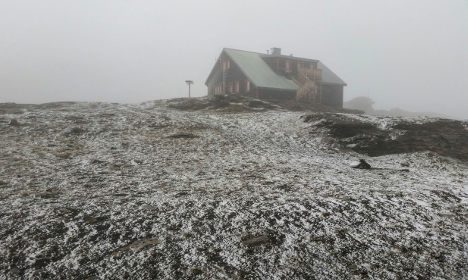 A meteorologist at Swedish weather institute SMHI warned that in the Stekenjokk area, near the Norwegian border, winds would average 100.8 km/h, reaching as much as 140.4 km/h in nearby villages on Friday afternoon.

“We've got some really heavy winds over the mountain areas,” she told the TT news agency, suggesting that hikers should avoid venturing out in the Lappland, Jämtland and Härjedalen regions in northern Sweden.

Eight yellow class-one weather warnings issued by SMHI earlier in the week had by Friday morning been upgraded to a total of 24 heavy wind and snow alerts, including an amber class-two warning for the Jämtland mountains near Norway.

READ ALSO: The Swedish town that missed out on summer

And snow that has fallen in Kiruna is likely to stay put over the weekend, said Stark.

“A low pressure front is moving in over northern Sweden today. Temperatures in the northernmost parts are going to stay at around zero over the weekend and precipitation is expected,” she told TT.

Meanwhile, southern and central Sweden were enjoying a sunny Friday, with the mercury set to land at around 15C on Saturday and Sunday.

“Temperatures will be mild, and that will continue over the weekend. There will also be plenty of sunshine,” said Stark.