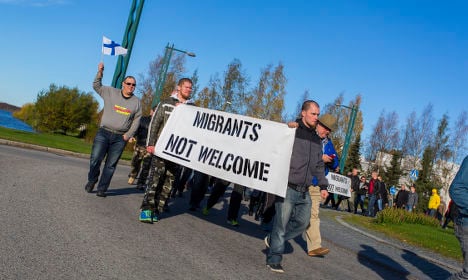 According to Swedish newspaper Expressen the mood was often rancorous but there was no violence.

Swedish news agency TT, reported that several of the anti-refugee protesters were carrying Finnish flags and holding placards such as “Migrants not welcome” and “No fucking immigration”.

More than 800 people had accepted the invitation on the anti-refugee protesters’ Facebook page to participate in the demonstration against the asylum seekers seeking protection. However, only 300 turned out.

An organiser for the counter demonstration told Swedish Radio's local channel in Norrbotten county that the demonstrations were peaceful and that 100 people had showed up to support the refugees.

Finland is experiencing an unexpected influx of migrants on its border with Sweden, mostly Iraqi asylum seekers hoping to reunite with friends and family.
By the end of September, more than 13,000 asylum seekers had arrived in the Nordic nation compared to just 3,600 in the whole of last year.
While Sweden takes in more asylum seekers per capita than any other EU nation and has pledged to offer a home to all Syrians fleeing conflict in their home country, Finland has been granting asylum to a higher percentage of Iraqis (45 percent during the first half of this year) compared to Sweden (33 percent).
According to Swedish Radio, some refugees make the long journey by bus and train to the Swedish-Finnish border in the north because boat trips over the Baltic would require showing identification.
In September Finland announced it would tighten control over its northern border in an effort to control the flow of refugees that come to the country by land.

The first protests at the border took place two weeks ago and, again, passed off peacefully.