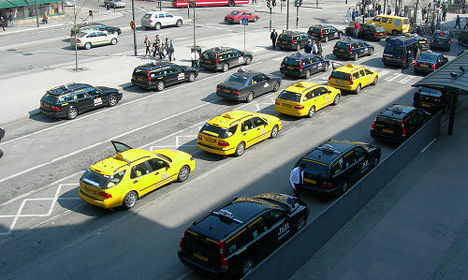 Swedish taxis. Photo: Minime, via Wikimedia
While there were some drivers who offered free trips to refugees, many have been charging excessive fares. A trip that would usually cost 65 kronor in central Malmö has been costing up to 1,000 kronor.

“I had to pay 400 kronor from the central station to Kontrapunkt social centre. First, we agreed on a price of 250, and then he wanted more when we arrived. I paid because I was afraid,” Hani Hamid, 30, an Iraqi refugee told Aftonbladet.

“It is terrible to be exploiting this situation. I have heard that the refugees had to pay between 500 and 1,000 kronor to come to us. It must be stopped,” said Johanna Nilsson, coordinator of the Kontrapunkt social centre, which has been providing up to 300 refugees a day with food and somewhere to sleep.

Aftonbladet talked to five refugees who had taken a taxi to Kontrapunkt – all paid double rate or more. Some refugees reported that drivers had convinced them to accept the inflated prices by telling them that it was forbidden for refugees to stay out on the street.

31-year-old Amir who arrived with his wife and child from Syria, said his taxi driver took his last money. The driver had offered him a ride to Kontrapukt – although Amir had told him several times that he could not afford it.

“He said we could go anyway. When we arrived, he demanded that I pay him. He threatened to take my bag if I did not pay. I got scared and gave him all my Turkish money – the equivalent of 200 kronor.”

Some drivers have also been massively overcharging for trips from Malmö to Gothenburg, according to the newspaper.

“There is a big problem with the drivers that use refugees. Last night 22 people came by taxi from Malmö. They had all overpaid,” Katarina Gauffin, coordinator of Refugees Welcome Gothenburg told Aftonbladet.

“They were charging 400 euros per person for a car with three or four refugees,” she said.

According to official statistics quoted by the TT news agency, 73,000 people had applied for asylum in Sweden by the end of September, close to the 74,000 expected in the country in the whole of 2015.
Last month alone, 24,306 people sought asylum in Sweden, a historically high figure that included 1,300 people on one single day.