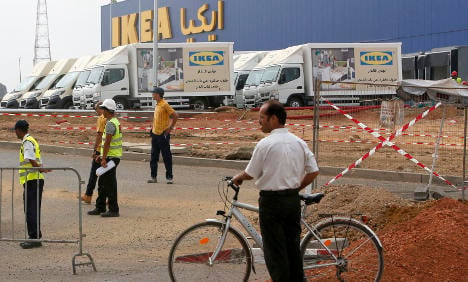 The Ikea store in Morocco which has not opened. Photo: Abdeljalil Bounhar/TT

Sweden’s foreign ministry confirmed to Swedish newswire TT that the demonstration had taken place, having previously issued a warning on its website advising Swedes to avoid the area around the embassy in the Moroccan capital.

“Yes, it was peaceful…Unfortunately we have no confirmed information on how many people participated in the protests,” Emma Karlsson, a spokesperson for the ministry, told TT.

But Swedish newspaper Expressen quoted local media sources which suggested that several thousand demonstrators had taken to the streets.

Morocco claims that Sweden is planning to recognize a breakaway republic in Western Sahara.

Following the tensions with Ikea, its government last week threatened to launch a boycott of all Swedish companies after claiming that Sweden had been campaigning to boycott products from the territory, which has been disputed since a war two decades ago.

“We are heading towards a boycott of Swedish companies according to the principle of reciprocity after similar campaigns to boycott Moroccan companies,” a statement issued after Thursday's cabinet meeting said.

Swedish Foreign Minister Margot Wallström confirmed on Thursday that Sweden's policy on the territory was the subject of an ongoing internal review, but denied a decision had been made on recognition.

The minister also denied that Sweden was boycotting exports from Morocco.

But Sweden and its Scandinavian neighbours largely support self-determination for Western Sahara. However other nations, such as France and Spain, have been accused of backing the Moroccan side.