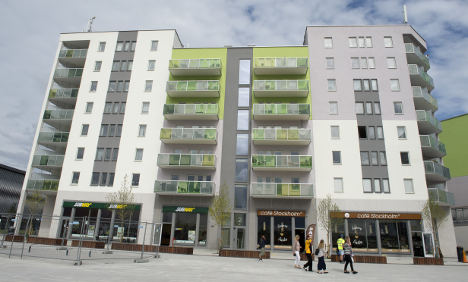 House prices are rising sharply and there is a risk that the Nordic nation is facing a property bubble that might burst, say top economists at NIER.

The institute, called Konjunkturinstitutet in Swedish, is a government agency that analyses the country’s economic performance and makes forecasts which are used as a basis for economic policy in Sweden.

“There is a significant risk that prices are at unsustainable levels,” NIER’s director Mats Dillen told Swedish broadcaster SVT on Tuesday, off the back of a new report from the agency.

According to SVT, it is the first time in modern history that NIER has warned that the Swedish housing market is in danger of crashing.

“Prices have continued to rise. The rate of increase is 10 to 15 percent per year and it cannot go on for ever,” said Dillin.

“We are now starting to worry (…) we have to slow down the development of house prices (…) If we don't try to slow this trend there is a risk that there will be an abrupt fall in prices later, a crash,” he warned.

The NIER’s warning comes amid rising concerns about property prices rocketing way above suggested asking prices at public auctions (the usual way Swedes buy their homes), alongside a trend in city apartments being sold to hand-picked customers who are prepared to pay a premium to avoid the bidding scramble.

Apartment prices are rising most quickly in Gothenburg and Stockholm, with one-bedroom properties in central locations now regularly selling for more than three million kronor ($352,439).

As The Local reported in May, there are also growing concerns that people in Stockholm and Gothenburg in particular are stretching themselves too far with their mortgages, putting them in danger of potential financial problems in future should market conditions change.

Researchers at Swedbank, which has eight million customers across Sweden, closely analysed mortgage payments for the bank's annual Boindex (property index) and warned that people living in the heart of the nation's cities were facing growing “affordability problems” due to needing to fork out more than 30 percent of their post-tax salaries on mortgage payments and other related costs.

“Housing affordability is rather good on an overall basis in Sweden but there is a very divided market and the average buyer of a cooperative apartment in Stockholm or Gothenburg is facing a higher risk than in the past,” Jan Ihrfelt, an analyst for Swedbank, told The Local at the time.