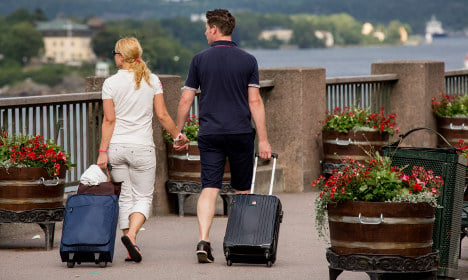 According to fresh figures published by the Swedish Agency for Economic and Regional Growth, a national government agency in charge of promoting entrepreneurship and local businesses, foreign tourism in Sweden broke new records this summer.

Tourists travelling to the Nordic country from abroad spent a total of 387,000 more nights in Swedish hotels, hostels and guest houses during June, July and August than in the same period last summer.

“There are two strong incentives for tourists to come here. Partly it's the genuine, unspoiled nature, and partly it's our Swedish lifestyle,” Thomas Brühl, chief executive of tourism organization Visit Sweden, told the TT news agency on Tuesday.

It is perhaps unsurprising that people are attracted to the stunning Swedish mountains of the north, the vibrant capital Stockholm, and even the country's long sandy beaches. But according to Brühl the Swedes themselves are enough of a tourist attraction to draw foreign visitors.

“It's how we live and our values that are fascinating to tourists. Our openness and our relationship with democracy interest them, for example our paternity leave,” said Brühl, referring to Sweden's generous parental leave to promote gender equality between mums and dads.

READ ALSO: How moving to Sweden made me a feminist

Most tourists still flock to the Nordic country from Germany and its neighbour Norway. But Indians and the Chinese are the two groups growing the fastest.

“Sweden is a relatively big tourist destination in the world. When it comes to foreign visitors we're between the 20th and 30th spots,” said Brühl.

Tuesday's figures back up statistics from the Swedish hospitality industry's trade association Visita, which last month noted a marked rise in the number of overnight stays from last year (up by 8.6 percent compared to June-August in 2014).

Foreign tourists have also been able to get more kronor for their dollars, pounds and other currencies this summer, which in turn is believed to have contributed to the hike.

While a year ago $100 for example would have bought you around 700 Swedish kronor, visitors were able to cash in the same amount for well over 800 Swedish kronor this summer.