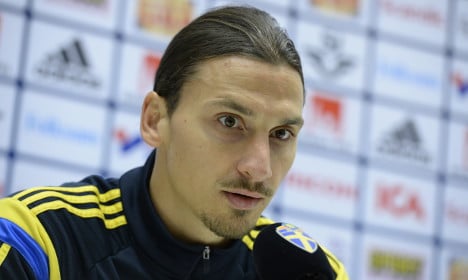 One of Sweden's most famous sport stars, Ibrahimovic's career is already lined with a plethora of non-football related feats. He has published a best-selling biography, had his face sold as artwork, and released a perfume for fans wanting to smell like him.

And soon you may be able to see him on the big screen.

Rumours have been floating around the world of football (and the movie scene) for a while. But on Tuesday at a press conference ahead of Sweden's clash with Liechtenstein later in the week, Ibrahimovic confirmed for the first time that he was considering the project.

“Everything is about what I want to do. If I want to. So we'll have to see. It would have been fun if something came around. But we have to see, a lot of other things have to click. You can't just say 'I want to' and somebody tells you 'we can do it'. But discussions are being held,” the footballer was quoted by Swedish tabloid Aftonbladet as saying.

The secret project is rumoured to be a movie version of the biography about Ibrahimovic's upbringing in the troubled Rosengård area of Malmö in southern Sweden and rise to global footballing fame, including years spent at Ajax, Juventus, Inter, AC Milan and Barcelona.

Published in November 2011, 'I am Zlatan' quickly became one of the all-time Swedish best-sellers and proceeded to sell millions of copies all over the world.

READ ALSO: Why is Zlatan Sweden's most dangerous celebrity?

Ibrahimovic already has a contact with Universal and he recently made an appearance in a documentary about English national fooballer Wayne Rooney.

But first, he is set to help Sweden to the European Championships when the team face Liechtenstein away in the qualifiers on Friday. Sweden still has a chance at reaching the play-offs despite a surprise 4-1 defeat to Austria in September.

The match will come less than a week after Ibrahimovic became the all-time leading goal scorer for Paris Saint-Germain after breaking Pauleta's record of 109 goals against Marseille. He described the experience as “magical” on his social media app.

He became Sweden's top scorer a year ago in an international friendly against Estonia, breaking Sven Rydell's tally of 49 goals, which had stood since 1932.

But the 34-year-old told reporters on Tuesday that he has no plans to hang up his shoes yet.

“I don't think that far ahead. I am here because Sweden is going to the European Championships and we have two important matches now that we are going to win. Most of my focus is on that,” he said.