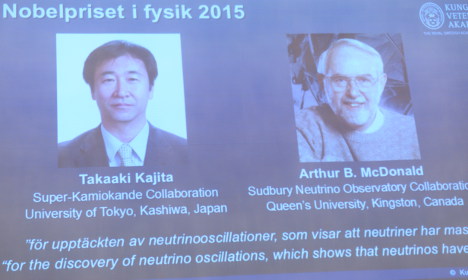 Arthur B McDonald, Professor Emeritus at Queen's University in Kingston, was woken up at 4am by representatives from Sweden's Royal Academy of Sciences. He was told he had won the 2015 Nobel Prize in Physics alongside Japanese researcher Takaaki Kajita, for their work on subatomic particles called neutrinos.

But the 72-year-old Canadian told reporters in a trans-Atlantic call following the Nobel announcement on Tuesday morning that he did not mind the early wake-up call.

“It's a very daunting experience needless to say. Fortunately, I have many colleagues as well who share this prize with me,” he said.

“When I received the phone call I was checking my emails” Takaaki Kajita, awarded the 2015 #NobelPrize in Physics pic.twitter.com/bTuK9O2VPe

McDonald and Kajita, Director of Institute for Cosmic Ray Research and Professor at the University of Tokyo, will be presented with the joint prize at an awards ceremony in Stockholm in December. They will share a total prize sum of 8 million kronor ($963,408).

AS-IT-HAPPENED: The Local's blog from the announcement in Sweden

Kajita, 56, discovered around the turn of the millennium that neutrinos from the atmosphere are able to 'switch' between two identies. Meanwhile, McDonald's research group in Canada demonstrated that the neutrinos from the sun do not disappear on their way to Earth and therefore have mass.

“This metamorphosis requires that neutrinos have mass. The discovery has changed our understanding of the innermost workings of matter and can prove crucial to our view of the universe,” read a statement by the Nobel Prize jury.

“For particle physics this was a historic discovery. Its standard model of the innermost workings of matter had been incredibly successful, having resisted all experimental challenges for more than 20 years. However, as it requires neutrinos to be massless, the new observations had clearly showed that the standard model cannot be the complete theory of the fundamental constituents of the universe,” it continued. But despite awarding the prize for the winners research on neutrinos, Olle Inganäs, Professor of Biomolecular and Organic Electronics, admitted that it was difficult to explain to the public exactly how the findings are benefiting mankind.

“I don't think there is any practical implication — for now,” he told The Local after the announcement in Stockholm on Tuesday.

In fact he said that if anything, the discovery that neutrinos have mass, when it was previously thought that they did not, demonstrates how little we really know about the universe.

“Most of the stuff that's out there we don't understand,” he said with a smile.

He added that he was happy that McDonald had described Stockholm as one of his favourite cities when speaking to journalists via a phone conference call.

“I think it's nice for Sweden to get a mention like that — and Stockholm of course — and I think it's also probably quite obvious because if you've lived in Canada all your life you've learned to appreciate the attractions of a somewhat cold climate.”

READ ALSO: Ten things to know about the one that got away

The Nobel prizes were created by Swedish philanthropist and scientist Alfred Nobel in his 1895 will, and were first handed out in 1901.

The physics award was the second Nobel prize to be announced in 2015, after the medicine award yesterday. The chemistry and literature prizes are set to be revealed in Stockholm later this week, while the economics prize will be announced next Monday. The peace prize will be handed out in Oslo on Friday.