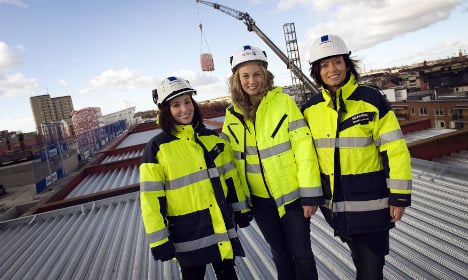 Gender equality in Sweden has been criticized. Photo: Cecilia Larsson/imagebank.sweden.se

The Nordic nation may be among the highest ranked countries in the world when it comes to equality between the sexes, but a commission set up by the previous centre-right Alliance government to monitor the impact of recent gender policies has issued a damning report of their impact.

“The actions were not strategically planned. There has been bad feedback and follow up,” chief investigator Cecilia Seidegård told Swedish broadcaster SVT on Wednesday as she handed her report to the government.

She said that while Sweden remains ahead of the game from an international perspective, residents must not “believe that we have the leader’s jersey in all aspects”.

In a separate debate article published in Swedish newspaper Dagens Nyheter, Seidegård noted that the Swedish labour market has become less gender specific in recent years, with more women entering roles in politics and public administration for example. But she said that the wage gap between men and women doing the same jobs remains unchanged, despite equality legislation designed to prevent this.

Swedish women earn six percent less than men in 2015 and the wage gap has narrowed by just one percentage point in the last 20 years. On average, women in the EU warn around 16 percent less per hour than men, according to a separate study released earlier this year.

Seidegård also wrote that “much remains to be done” in the fields of business and academia in particular, arguing that “the glass ceiling is still there” even if it has been crushed in some areas.

In addition, she noted that while large numbers of men take parental leave in Sweden, women still tend to do more housework and are more likely to work part time after having children. She also said that violence by men towards women remained a “very serious” concern.

READ ALSO: 'Moving to Sweden has made me more feminist'

The 61-year-old – who had a long career in Sweden’s pharmaceutical industry before becoming governor of the Swedish island of Gotland in 2010 – is now pushing for a permanent Equality Authority to help guide Sweden as it continues to strive for a more equal distribution of power and influence now that her investigation is complete.

“The trend towards an equal society is far too slow and is sometimes reversed. I believe that an Equality Authority is a necessary tool for a feminist government for achieving its gender equality objectives,” she wrote.

There was no immediate response to her suggestion from Sweden’s Social Democrat-Green coalition, which took over from the Alliance a year ago.

But Sweden’s Social Democrat Prime Minister Stefan Löfven is a proud feminist and has sought to promote his vision for a more equal society both at home and abroad.

His party is trying to push through new legislation that would force both parents to take or lose three months of parental leave each and he homed in on gender equality in his first major speech in September, following a parliamentary recess in Sweden.

In January he became an international advocate for women's rights when he was appointed 'Impact World Champion Leader' for the United Nations' #HeForShe campaign. The initiative, which was later launched in Sweden, saw the Swedish leader locked in discussions with former Harry Potter actress Emma Watson at the World Economic Forum in Davos, Switzerland.