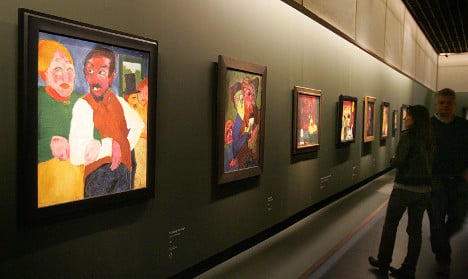 Work by Emil Nolde (seen here in Paris) is on show in Gothenburg this week. Photo: Remy de la Mauviniere/TT
1. Objects and bodies, Moderna Museet, Malmö
Southern Sweden's biggest art museum is offering a taste of the Big Apple, featuring work from a network of artists and choreographers who were active in New York in the 1960s and 1970s. According to Magnus Petersens, the exhibition's curator: “What happened in art and dance during a few years in the sixties fundamentally changed the relationship between viewer and artwork. Instead of standing outside and looking in, the viewer became a participant — and therefore a co-creator. This is the explosive political force hidden behind polished abstract surfaces”. Check the museum's website for dates when the exhibition will include live performances.
Dates: Open from now until February 7th 2016
Website: www.modernamuseet.se/en/Malmo/Exhibitions/2015/Objects-and-Bodies/ A section of a Love Lundell picture. Photo: Love Lundell/Wetterling Gallery
3. Colour Storms, Konstmuseum, Gothenburg
Work by one of Europe's best loved expressionist painters, Emil Nolde, is on display at Gothenburg's largest art gallery, Konstmuseum, this autumn. Around 90 of the artist's oil paintings, watercolours and graphic prints are included, from landscapes to depictions of Berlin's nightlife.
Dates: Open from now until January 17th 2016
Website: www.konstmuseum.goteborg.se/wps/portal/konstm/english

A previous Nolde exhibition in Paris. Photo: Remy de la Mauviniere/TT
4. Where children sleep, Fotografiska, Stockholm
Prestigious Swedish photographer Magnus Wennman has produced a powerful photo collection documenting children sleeping away from their homes during the global refugee crisis.
“They just wanted to get somewhere where they could feel safe and sleep in a real bed. They were so frustrated,” he told The Local last month. “My aim is that people will react and feel something,” he added.
Dates: Open from now until January 24th 2016
Website: www.fotografiska.eu/en/utstallningar/utstallning/dar-barnen-sover/ Ahmad, 7, lays among thousands of other refugees on the highway leading to Hungary’s closed border. Photo: Magnus Wennman
READ ALSO: Ten must-see museums and galleries in Sweden's capital
5. A story within a story, Röda Sten Konsthall, Gothenburg
Part of Gothenburg's International Biennual for Contemporary Art, this exhibition raises questions about the meaning of history and how it is created. Organisers promise: “A story within a story will explore history as a radical act by focusing on socially engaged projects, which interrogate notions of collective memory and publicness from transnational and transhistorical perspectives”.
Dates: Open from now until November 22nd 2015
Website: www.gibca.se/index.php/en/gibca2015/a-story-within-a-story Röda Sten gallery in Gothenburg. Photo: TT/Fredrik Persson
Check out our interactive calendar below for everything else happening across Sweden this week.