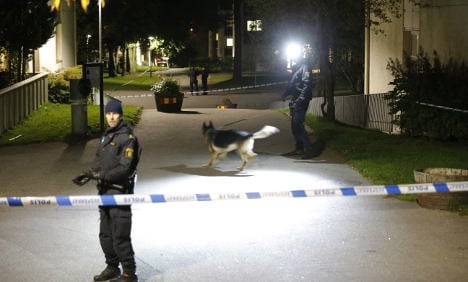 Officers said that two people spotted at the scene of the attacks on Wednesday evening were seen riding off on a moped at around 7pm.

Christer Fuxborg, a spokesperson for the region’s police force, told the TT news agency that the men who were injured are thought to be aged between 20 and 25 and that both were conscious when they were taken to hospital.

“One of them was found lying in the street. The other man was on a staircase along the same street,” he explained, adding that the latter victim had been shot in the leg.

Police had not arrested any suspects by Thursday morning but had cordoned off a large area around the scene of the shooting.

According to TT, the attacks have been classified as a “special event” which means that more police resources can be released to expand the investigation.

Borås has around 66,000 residents and is Sweden’s textile and clothing industry hub as well as one of the country’s key student cities.

It is about 60km west of Sweden’s second largest urban centre, Gothenburg, which has experienced a number of high profile shootings in 2015 including an attack at a restaurant which left two people dead, put eight others in hospital and made global headlines.

The violence took place amid rising concerns about gang crime in the area.