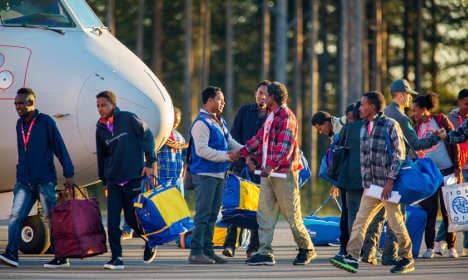 The asylum seekers were transferred to Sweden after it agreed on July 20th to take refugees from Italy and Greece in a bid to ease the humanitarian and financial burden on the two frontline states over two years.

Earlier Friday, the 19 Eritreans — 14 men and five women — had shaken hands with EU migration commissioner Dimitris Avramopoulos and waved as they boarded a financial police plane at Rome's Ciampino airport.

“It is a defeat for those who claim it is better for the Mediterranean to become a lake of death… and believe that scaring the European people is the way forward,” he added.

The Eritreans landed in Luleå in northern Sweden shortly after 4pm on Friday. They were later set to hand in their applications for asylum at a centre in Boden, according to a press release from Sweden's Migration Agency.

They will then be offered a spot at a centre for refugees in the Östersund area in Sweden's Jämtland region. The EU formally agreed on the plan last month despite the opposition of some eastern European states worried about a popular backlash to migrants.

Until now, member states have only agreed to redistribute 32,000 people but are expected to make up the difference by the end of the year.

With the crisis worsening, the EU has agreed to relocate a further 120,000 after overriding opposition from the same eastern European states.

Of those, 5,700 will be transferred to Sweden, which last year took in more refugees per capita than any other EU country.

Up until Wednesday this week, 81,400 people have applied for asylum in the Nordic nation in 2015, according to migration officials.

In September alone, 24,306 people sought asylum in Sweden, a historically high figure that included 1,300 people on one single day.

While Sweden has a global reputation for helping refugees, it has faced some internal criticism following complaints from asylum seekers about long waiting times and access to housing.

The country's migration agency has warned that gyms and disaster shelters need to be used to accommodate the overflow before winter sets in and on Friday the government said heated tents would be erected if needed.

Östersund is a city of around 45,000 residents in the Jämtland region, located in northern parts of central Sweden. It has a long history of hosting several championships in outdoor sports such as ski orienteering, speed skating and cross country skiing.

Prime Minister Stefan Löfven's Social Democrat-Green coalition has promised to increase funding for refugees in its autumn budget. It is also pushing to encourage municipalities across Sweden to accept more asylum seekers.