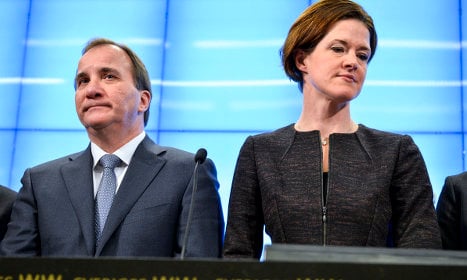 Sweden's mainstream parties struck the December Agreement to avoid unexpected opposition to future government financial plans, following a political crisis sparked by the nationalist Sweden Democrats last autumn, when they sought to prevent the coalition's budget getting through parliament.

Christian Democrat bosses, including leader Ebba Busch Thor, had wanted to keep the hotly debated deal, but were voted down by party members at a party conference on Friday afternoon.

“The December Agreement is a parenthesis in Swedish politics,” said a triumphant Sara Skyttedal after the vote, head of the party's youth wing and who had campaigned for the deal to be scrapped.

“We are not prepared, during this and the next term of office, to be some supporting troops to Stefan Lofven,” said Christian Democrat Anders Andersson, who championed ending the accord at the party's annual convention.

“We don't accept that a left-wing, socialist policy is pushed through the Swedish parliament even though it lacks support.”

As a result, the Moderates and the Liberal People's Party also immediately announced that they were abandoning the accord.

“The Liberal party wants to avoid Sweden being thrown into political chaos, but unfortunately that cannot be excluded,” party leader Jan Bjorklund told Swedish news agency TT, while Anna Kinberg Batra, leader of the Moderates, simply said that if one party pulled out of the deal, all parties would have to.

In a written statement late on Friday night, the Swedish prime minister, Stefan Löfven, said: “It is outrageous that they have violated an agreement that they signed and defended to the voters.”

“Sweden is facing some of the toughest challenges in modern times. The crisis in schools, high unemployment and the refugee crisis must be addressed forcefully. There are now demanding that these parties account for their new promises and not to create another parliamentary deadlock.”

The December Agreement was struck in late 2014 after Prime Minister Stefan Löfven's Social Democrat-Green coalition called a re-election after his budget fell in parliament when the nationalist Sweden Democrats instead of abstaining backed the centre-right opposition's budget.

The snap vote was later scrapped after secret negotiations with the four Alliance parties led to the December Agreement, designed to prevent future similar crises and cut the Sweden Democrats' influence by agreeing to let future government budgets through parliament.

But many of the centre-right parties, including the Christian Democrats, have faced internal criticism over the controversial deal and its bosses were defeated on Friday with 151 members voting for a motion to pull out of the agreement while only 103 voted against.

Some observers warned that the collapse of the accord might lead to a snap general election.

“This means a much more volatile and unstable situation,” Gothenburg University Political Science Professor Ulf Bjereld said. “The risk of snap elections has increased, but most parties don't want that.”

With Sweden expecting a record number of asylum seekers this year as Europe deals with its biggest refugee crisis since World War Two, the right-wing nationalist Sweden Democrats have been the only party to make significant poll gains since last year's election.

One opinion poll in August had them as the largest party, with a quarter of respondents favouring them, although another poll on Friday put them at just 19.5 percent.

“They (the Sweden Democrats) are the only clear winners of a snap election,” said Bjereld.

However, most experts agreed on Friday that the decision would have little practical implication when parliament votes to agree on a budget this October. The four Alliance parties have previously said they will put forward four separate proposals, which on their own will not enjoy enough support to overrule Löfven's bid.

“It's only if the Alliance parties put forward a common budget and vote for that that the government would be able to lose a vote. But the other parties have not agreed on that,” political scientist Magnus Hagevi of the Linné University told Swedish newswire TT.

But the move could still cause trouble for the mainstream parties, with Sweden Democrat leader Jimmie Åkesson welcoming the decision and announcing on Twitter that he would push for a vote of no confidence next week in an attempt to oust Finance Minister Magdalena Andersson.