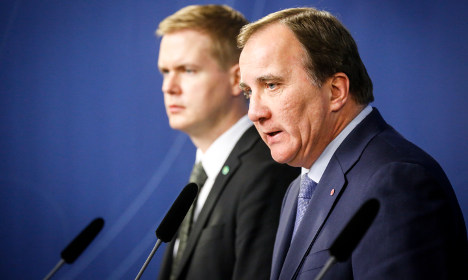 “Sweden is preparing for a crisis situation,” the premier told a press conference in Stockholm on Friday.

“Our focus is now on [providing] an organised reception. First of all, to ensure there is accommodation. The standards are being lowered. It’s a matter of providing roof over heads. The government has today commissioned The Swedish Migration Agency to set up tents if it is necessary,” he said.

“We’re facing the worst international migrant crisis since the Second World War. In the past seven days, 8,899 people have registered here. If it continues at the same pace, more than 150,000 people will have made their way here,” Löfven said.

Migration Minister Morgan Johansson said that local authorities across Sweden were being asked to make an inventory of all available venues that could potentially be used to house refugees, including camp sites, industrial buildings, apartments and sport halls.

Tents will also be used to temporarily provide shelter if necessary, but Johansson was quick to stress that they would be heated, as nighttime temperatures are now dropping to zero degrees Celsius in most parts of the country.

He said Sweden was at a “critical juncture”. “More than 1,000 asylum seekers are arriving in Sweden every day,” he added.

The ministers spoke as Sweden was set to welcome a group of 19 Eritreans travelling from Italy as part of the first phase of the EU's controversial redistribution programme.

Last month, the union formally agreed on sharing the burden of the migrant influx which has been caused by a surge in war and unrest in the Middle East, Africa and parts of Asia.

But despite the deal on mandatory quotas, which entails the redistribution of at least 32,000 people by the end of this year and another 120,000 refugees over the next two years, member states continue to bicker about the amount they are ready to accept.

Most of the opposition has come from some eastern European states, including Czech Republic, Hungary, Romania and Slovakia.

Due to the opposition they have faced, many migrants have instead headed to countries that are perceived as more welcoming to accept them, including Sweden and Germany.

But while Sweden has a global reputation for helping refugees, it has faced some internal criticism following complaints from asylum seekers about long waiting times and a lack of access to housing in the bigger citites.

The country's migration agency had previously warned that gyms and disaster shelters would be needed to solve the accommodation issue before the cold Swedish winter would set in.