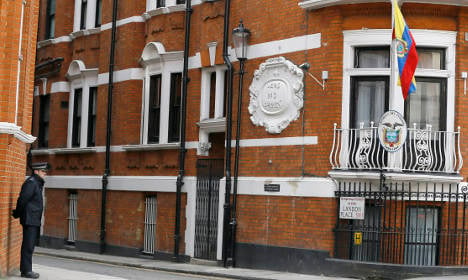 A police officer outside the Ecuadorian embassy in March 2015. Photo: Kirsty Wigglesworth/TT
London's police force said that it would strengthen a “covert plan” to prevent Assange's departure, instead of continuing to provide 24/7 surveillance outside the embassy where he has been hiding for more than three years.
“The Metropolitan Police Service (MPS) has today…withdrawn the physical presence of officers from outside the Embassy,” police said in a statement.
“Whilst no tactics guarantee success in the event of Julian Assange leaving the embassy, the MPS will deploy a number of overt and covert tactics to arrest him.”
Swedish still prosecutors want to question Assange about rape allegations, which carry a 10-year statute of limitations and run out in 2020. But other claims made against him by two women in 2010 have now expired.
Assange, who faces arrest if he tries to leave the embassy, denies the allegations and insists he only had consensual sex during a visit to Stockholm five years ago.

READ ALSO: The twists and turns of the Julian Assange case
The 24-hour guard outside the embassy in central London has cost British taxpayers more than £10 million ($15.4 million, 13.5 million euros) and is the source of much criticism in austerity-hit Britain.
“Like all public services, MPS resources are finite. With so many different criminal, and other, threats to the city it protects, the current deployment of officers is no longer believed proportionate,” police said on Monday.
“A significant amount of time has passed since Julian Assange entered the embassy, and despite the efforts of many people there is no imminent prospect of a diplomatic or legal resolution to this issue,” they added.
The 44-year-old Australian also fears that if he leaves he could eventually face extradition to the United States and a trial over the leak of hundreds of thousands of classified military and diplomatic documents in 2010.
Swedish officials said in August that they hoped to reach a judicial cooperation deal with Ecuador by year's end that would pave the way for prosecutors to question Assange.
On Monday afternoon the British Foreign Office said that the head of the diplomatic service, Simon McDonald, had summoned Ecuadorean Ambassador Carlos Abad Ortiz to insist on a resolution to the impasse.
“The UK has been absolutely clear since June 2012 that we have a legal obligation to extradite Assange to Sweden,” said the ministry statement.

“That obligation remains today,” it added.