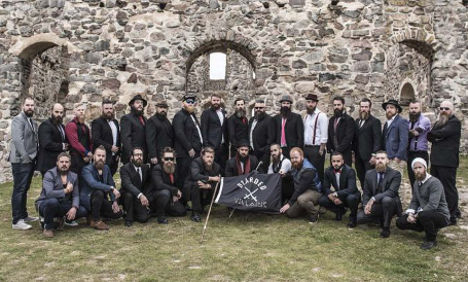 The Bearded Villains Sweden group snapped on Saturday. Photo: Jason Mellström/Studio Mellström
Bearded Villains Sweden is a group of men that campaigns against “injustice, bullying and racism”, but its members got a visit from Swedish police over the weekend as they gathered to pose for new publicity shots alongside a black flag.
Officers in Jönköping in southern Sweden where the photoshoot was taking place had received a call from a local man who had reported seeing what he described as around 30 terrorists stood by what he understood to be an Isis flag.
But when police turned up at the gathering on Saturday, they quickly realized that the men were in no way connected to the radical Islamist group.
“It went from an 'Isis crisis' to a lot of laughing really fast,” John Ekeblad, a member of the group, told The Local on Monday.
“The police soon went away. They didn't even care that we had some faulty parking in the area, they let us be,” he laughed.
READ ALSO: Swede's 21st birthday balloons dubbed ''IS propaganda
News of the mix-up quickly went viral in Sweden on Monday after being reported by local newspaper Jönköpings-Posten and picked up by national dailies including Metro.
“It just boomed,” explained Ekeblad, adding that he and his fellow campaigners “loved” the fact that they had been mistaken for terrorists.
“That's what we are working for, to stop people being small-minded. The first thing they [people] think when they see men with beards and a flag is Isis. But bearded men can be nice and giving and loving as well,” he said.
“It made our day,” the 29-year-old added.
READ ALSO: French tech college ISIS sparks customs alert
It is not the first time that Swedish police have mistaken people with no radical beliefs to Isis members.
In February a girl who hung balloons in the shape of the number '21' for her birthday was paid a visit by officers who thought the shapes stood for 'IS' and had been put up by supporters of the extremist group.
The Bearded Villains movement is not unique to Sweden. It was founded in the US in 2014 “with the purpose of showcasing bearded men with character”, according to its website.
Ekeblad told The Local on Monday that the Swedish arm planned to continue its work fighting for equality and would be soon taking part in Musikhjälpen, a large charity fundraiser in December organized by Swedish public broadcaster Sveriges Radio.
“We're gonna do a big activity and hopefully do some good,” he said.