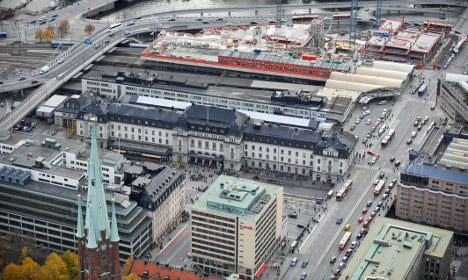 Stockholm Central Station (the white building in the centre of the picture). The road on the right is Klarabergsviadukten. Photo: Bertil Ericson/SCANPIX
The centre, which is likely to made from prefabricated modular housing, is set to be put up in the coming weeks, most likely at Klarabergsviadukten, a major flyover next to the train station.
It is expected to include washing and toilet facilities and is designed to be a place where refugees can keep warm and be fed during the harsh Nordic winter.
“It is not primarily meant to be a temporary new accommodation facility, but a reception from which people can move on,” Olle Johnselius, a spokesperson for Stockholm City Council, told the TT newswire on Tuesday.
He said that the final details of what the reception centre would offer were still being worked out by representatives from the council and said that officials from the Swedish Migration Agency (Migrationsverket) and charities “must all be involved and speak up”.
He indicated that the move was also designed to shift refugees away from other parts of the station complex frequented by commuters and tourists.
“I think everyone wins through this,” said Johnselius.
“I think it will get quieter at the Central Station. We will be able to show a positive side, a 'welcome'(…) And we're entering the colder seasons where warmth is so important,” he added.
READ ALSO: Five ways to help refugees if you live in Sweden
The reception centre plans come after Stockholm City Council wrote to the Swedish Civil Contingencies Agency (MSB) to say that it was struggling to cope with the influx of refugees to the Swedish capital.
It's message stated that staff were “not able to handle the situation with current resources, procedures and requirements.”
More refugees have sought asylum in Sweden so far in 2015 than in any other year in the Nordic nation's history, new figures released by the country's Migration Agency revealed on Monday.
86,223 people have launched cases in 2015, surpassing a previous record set in 1992 when 84,016 people sought asylum in the Scandinavian country following fighting in the Balkans.
The figures emerged days after Sweden's Prime Minister announced that tent camps would likely be needed in order to provide enough shelter to refugees.