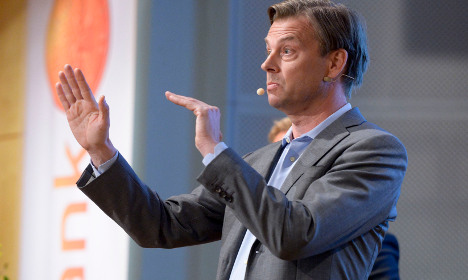 Unlike in previous years when the ranking was based only on “hard numbers”, Harvard Business Review took into account areas such as environment, social responsibility and governance (often referred to as ESG to denote socially conscious businesses).

“Our view is that, in an era of big data and greater transparency, consumers and investors want to understand a company's culture and values, not just its share price,” the prestigious journal stated, explaining how this year's top bosses were picked.

READ ALSO: Ten phrases you only hear at work in Sweden

Michael Wolf has led Swedbank for six years. The company was able to report operating profits of 5.2 billion kronor in its six-month report this summer. With its eight million private banking customers it is Sweden's biggest bank and has around 14,000 employees.

Other Swedes nabbing spots on the list were Lars Renström of Alfa Laval and Johan Molin of Assa Abloy, who were ranked 48th and 52nd. The Belgian CEO of Sweden-based Atlas Copco, Ronnie Leten, claimed 31st place.

But despite Sweden boasting famous businesswomen such as Antonia Ax:son Johnson and Christina Stenbeck, only two women, both from the US, made it on to the list, Debra Cafaro and Carol Meyrowitz.

Top of the rankings was a boss from Sweden's Scandinavian neighbour, Denmark. The head of Novo Nordisk, Lars Rebien Sørensen, 61, was named the world's best CEO.

The Dane has been with Novo Nordisk for 33 years and has been at the company’s helm for 15. He said that in that time he’s “been part of some of the most stupid mistakes” and downplayed his spot on the top of the global rankings.

“I don’t like this notion of the ‘best-performing CEO in the world’. That’s an American perspective – you lionize individuals. I would say I’m leading a team that is collectively creating one of the world’s best-performing companies,” he told HBR.

Sørensen described his leadership style as “Scandinavian” and “consensus-oriented” but added that the six years he spent working in the US made him “slightly more aggressive than the typical Scandinavian business leader”.