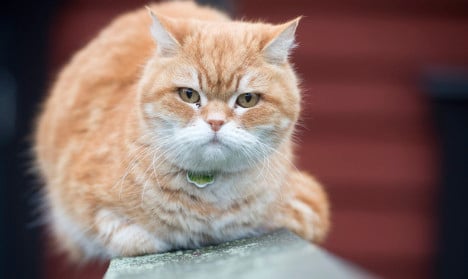 A different Swedish cat. Photo: Fredrik Sandberg/TT
Over the past seven days, six cats have been declared dead on just a few streets in the Södra Ryd area of Skövde, according to local media.
Two of the animals were found in a plastic bag in a basement, while the other pets were found both with severe cuts or with “no clear visible wounds”, one anonymous witness told the town's newspaper Skövde Nyheter.
Skövde is a small Swedish town in Västra Götaland nestled between the country's two largest lakes.
Police are understood to be investigating the apparent animal cruelty in the area, although a press officer for the region's force told The Local on Tuesday that he knew “nothing about the animals”.
Minna Sorio, a cat owner who lives on Timmervägen where some of the alleged attacks took place described to Skövde Nyheter how she was becoming increasingly fearful for her animals' safety.
“It started a week ago when a neighbour found a cat whose stomach was cut open,” she said.
“Last Sunday my son even found a dead cat when he was out walking the dog. It resembled one of the cats we have and he was obviously worried and ran home.”
READ ALSO: Swedes rescue Syrian refugee's pet cat
Sorio said that since the spate of suspected killings, she had tried to protect her family's pets by encouraging them to stay indoors. But she explained that it was difficult to keep track of the animals after it got dark.
“One of them is used to going out, so it is not easy to stop her from sneaking out.”
The same town experienced a severe case of animal cruelty three years ago when a cat was found strangled in a tree.
“It feels terribly unpleasant when everything seems to repeat itself,” added Sorio.
News of the cats deaths come less than a fortnight after a different town in central Sweden hit the deadlines because its residents were scared for their pets following a nummber of suspected attacks by wolves in the area.
There was no suggestion on Tuesday that the attacks in Skövde had been carried out by the animal predators.