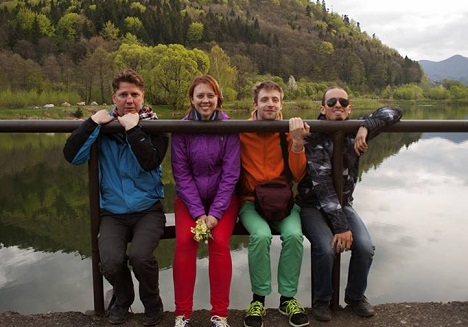 Anna Kryvenda studied at Chalmers Univeresity, and after completing her studies she stayed in Gothenburg. But she struggled with feelings that there was something more she should do.

Anna and her German boyfriend Grischa both knew the importance of education and the essential role travelling played in their personal development.

Furthermore, they considered Ukraine as a country with rich culture, beautiful and diverse nature, open people and lovely cities – but with few people outside of Ukraine being aware of this.

As a possible way of combining education and travelling, the concept of “Travel to Share”, TraToS, was born.

The idea was to gather a small group of tourists who were keen on visiting the country, and take them on a one-week tour through western Ukraine, visiting a number of schools on the way and telling local children about their background and experiences in order to inspire them.

After many months of preparations, we, the first TraToS team, gathered in Lviv in Western Ukraine for a weeklong tour. Our group consisted of a total of four people from four countries.

Our first stop was in the industrial city of Rivne, in the north-western corner of the country, where we sampled the local cuisine. Ukrainian cuisine is amazing; the tastes are various and combinations are sometimes unusual, making a wonderful gastronomic experience.

The journey continued by Marshrutka, a small minibus, to the town of Klevan, even further north. The town is well-known for its so-called ‘Tunnel of Love’, a railway stretch surrounded by branches. In the spring and summer, this turns into an entirely green tunnel.

After a good night’s sleep, the first visit to a local school was on the program the next day. We felt curious and probably a little bit scared and unsure of what would happen while entering the classroom.

I started telling a story about Sweden and how I got there. Being originally from Ukraine myself, my story is probably the one the pupils can connect to the most. Afterwards, three other stories followed, all very different from each other.

The pupils were obviously excited and, once they started getting over their shyness, they asked more and more questions as well.

On the way back to Rivne, we spontaneously stopped at a local greenhouse where cucumbers and tomatoes are grown. We instantly boarded the train in Rivne, almost missing it first, and headed back to Lviv after we left it not even 48 hours earlier.


Having fun in Rivne.

But wait…there is more. We wasted no time in Lviv and boarded a Mashrutka to Drohobych, south of Lviv.

The next morning, we visited an arts school for gifted children in Pidbuzh, a tiny village at the Carpathian foothills. The headmaster welcomed us with a small snack – and cognac. At 10:00 in the morning!

Warmed up, we stepped into our second classroom. While the first visit was in many ways much closer to the educational style in our home countries, the class we were facing now was much more strictly organised.

This time, we listened to a lesson about music and how to become a professional musician. While somewhat staged, it was certainly an interesting experience.

Afterwards, we watched a presentation by the school’s pupils about Ukrainian culture.

Finally, I was also able to present my story in short to the pupils and tell the students about possibilities to study abroad and experience other cultures.

What followed was an exemplary showcase of Ukrainian hospitality. We were invited to have lunch with the headmaster. When a lady came by and served us soup, we started to realise that all the food on the table had only been the starter. The only problem was: we were nearly full already.

Long story short, we were basically rolling out of the building and towards our next stop: Truskavets.

Truskavets was one of the big spa resorts in the Soviet Union and remains a popular tourist and health destination even today. We were staying in one of the big Soviet-time sanatoriums, featuring unfriendly receptionists and rooms unchanged for decades.

The main activity in this place was to taste the mineral waters which come in several flavours with different health effects. As the mineral springs have high sulphur content, the taste is a bit special.

The final stop before our return to Lviv was Skole, a laid-back town in the Carpathian foothills. In the last school of our trip, we were again welcomed in the headmaster’s office with cake and coffee.

Afterwards, we made our way to the school’s biggest room, where pupils of all ages were prepared a short introduction to Ukrainian Easter traditions.

Additionally, we were presented with embroidered tablecloths in traditional Ukrainian style, with the local press carefully documenting the whole event. We were able to present, and rounded up with my speech about my education path from Ukraine to Sweden.

The best came last for us on this trip: English class with fourth-graders. How do you communicate with a roughly 10-year old child, not sharing a common language?

Each of us was led to a table with about 5 kids and 30 minutes time to entertain them. Somehow, everyone managed and enjoyed the class and – hopefully – the kids will remember it. As in the previous school, the official part was followed by a large banquet. This time, the food and alcohol intake was somewhat more down-to-earth and manageable for non-Ukrainian stomachs.

Back in Sweden, the story continues. We received English emails from some of the students, inquiring about possibilities to go abroad for studies. Additionally, we have now established enough contacts for further trips in western Ukraine. Finally, we are in contact with active young people in Lviv and around, who might help in organizing or even running future instances of TraToS.

All in all, the journey will continue!