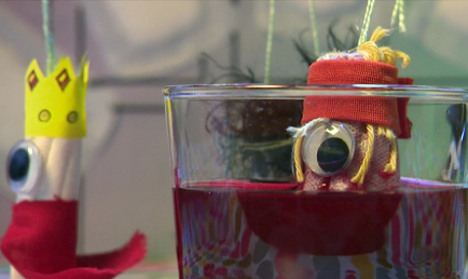 A publicity shot for the programme. Photo: SVT
Alex Hermansson, 23, who is one of the hosts for Swedish television channel Barnkanalen, is seen strumming on a guitar in the video before manoevering four dancing tampons dressed as kings and pirates.
He sings that periods are “something that happen to girls sometimes” and advises that others should be “a little extra kind” to those who are menstruating.
“Periods, periods – hip hip hooray for periods!” the lyrics continue.
“Drippety drop, drippety drop, here comes my period (…) Hooray for periods!”.
Hermansson is then seen rapping that when girls menstruate it is healthy, but they might need “films, warmth and a lot of chocolate”.
The video will feature as part of a full programme on menstruation to be broadcast by Swedish public broadcaster SVT on Friday.
When contacted by text message on Tuesday, Hermansson told The Local: “I think it's just fun and cool to talk about periods (…) the only thing that was a little awkward was to sing in public, just because I am really not an experienced singer.”

He added: “The more knowledge and transparency [there is] the less of a stigma that many girls carry.”
The song follows in the footsteps of a video about genitals which went viral after being included in the same show earlier this year.
The genitals track initially attracted criticism after some parents complained that it wasn't appropriate viewing and YouTube briefly classified it as 'adult content' before reversing its decision. But it ended up scoring more than six million hits on YouTube. It was even remixed and played in Swedish night clubs and later released in English. SVT host Alex Hermansson. Photo: SVT
In a statement, Petter Bragée who is in charge of programmes for children and young people for SVT said he felt the new video on menstruation was important because it is “a topic that is relevant for children to know more about, both boys and girls”.
“You should be able to talk about the most natural thing as half the world's population is involved,” he added.
He said he believed that one way to demystify the subject was to produce “something lighthearted” and said he hoped that menstruation would become less taboo as a result.